From roughly 1970 to 1990 I “doodled” around Baltimore, Maryland making photographs. (These two black and white images were part of an exhibit called “Family, Friends and Neighbors” at Fells Point Corner Theater sometime in 1998 or 99.) For the most part I focused on the streets of South Baltimore, near the harbor, where I had lived for five years, age seven to twelve. When I was twelve my parents “broke up housekeeping,” as my mother put it, and I was farmed-out to my three half-sisters, one in another Baltimore neighborhood, and the other two in Virginia and Kentucky. At age seventeen I enlisted in the U. S. Army, but that’s another story. So, back to my main point. With hindsight, I now see that by making images of “free range” street kids in my old South Baltimore neighborhood, I was revisiting the happier time of my youth before my folks split up. The image above is one of my favorite shots, a group of girls I encountered on November 18, 1972, near Cross Street Market in South Baltimore. I call them sisters, but have no idea if they were related. More about them later 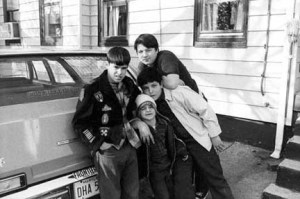 On November 21, 1976, almost four years to the day after I photographed the girls, I caught this group of boys in Hamilton, a Northeast Baltimore neighborhood. You can see what I didn’t notice at the time, which is there are huge similarities between the two images. In this case, though, I knew the kids very well. The two boys on the right are my sons, Shawn and Vince, ages fifteen and thirteen. The taller of the two boys on the left is their stepbrother, Johnny, and the little guy in between, with the scrunched up smile, is their half brother Tony. The house in the background is the one they shared for many years with their mother, stepfather and siblings, including another stepbrother named Joey. I take full credit (or blame) for the composition in this image. I allowed the boys to group themselves, then moved a few steps to the left in order to frame them against the station wagon and the house. I could have stayed where I was, or moved to the right, or in closer, but when I have the time I like to arrange two background shapes in the frame, one large and one small (in this case the car and the wall) to provide a strong design foundation for the image. The idea is that a large shape next to a smaller shape creates a more attractive overall abstract design than would two big or two small shapes side by side. “Visual contrast” is the fancy term artists use for this device to structure images, but during the fifteen years I taught cartooning to kids in schools and libraries I called it, simply, my “rule of big and small.”

The kids in both photographs had arranged themselves without prompting by me. When that happens and it turns out well—as it often does—it’s pure serendipity. Over the years serendipity became a favorite photography “technique” of mine. I found that if I gave my young subjects little or no direction they usually came up with a pose better than any I could have conjured.

When I first spotted the “sisters” they were moving away from me, but as serendipity would have it they noticed my camera and turned. Free range street kids, I knew, love to be photographed. Sisters Four was a grab shot, but I had good luck with their pose and the rushed composition turned out pretty well. (Well enough, actually, to be published in the old Baltimore Sunday Sun Magazine as part of a contest. Which, by the way, I didn’t win.) I like the overall pyramid shape the grouping forms with the apex, the head of the tallest girl, framed between the two windows. (Also note the little girl between the larger girls, similar to the small boy in the Brothers Four image.)

I’m also a fan of dynamic blur in photographs, another result of serendipity. Blur often happens when you have to snap kids on the fly, which is most of the time, and you’ve set a too slow shutter speed. Street kids seem always to be in motion, totally uninhibited, expressing either positive or negative emotion, and these elements combine to make them wonderfully spontaneous collaborators. The little boy in the foreground of Sisters Four with the sucker in his mouth (the brother?) is an example of my serendipitous doodle-like blur technique. (The method is copyright-free, so if you like the result feel free to use it in your own photography.)

My favorite example of a happy-accident-masquerading-as-technique is this totally blurred image of boys playing in shadowed Churchill Street, near Federal Hill Park in South Baltimore. The blur happened

have time to set the proper shutter speed; I was lucky just to grab the action. This is a picture I love because of its dynamic flaws, even the composition is the result of pure serendipity. (Churchill Street, by the way, is a grand name for what is really an alley lined with tiny row homes, all of them long since rehabbed and gentrified. But at the time I made the image, in the 1970s, it was still very much the mostly transit neighborhood of my 1950s youth.)

Flashback to December, 1967
I’m living in a rented room in a tiny blue house in a nondescript suburb on the western edge of Baltimore. I’ve left my marriage of seven years and my two sons, ages four and six. I’ve signed the deed of our modest brick semi-detached house over to my wife. Our separation settlement provides for child care, of course, and a she gets all our community property, including the furniture and car. The only things I take are my clothes, my drawing table (a Christmas or birthday gift form my generous in-laws), a few art supplies and the outstanding bills: Montgomery Ward, the car loan, a few other small debts, all of which I agree to pay off.

These days when I look at my old photographs I see stories. The big story, the overarching tale that accounts for my life from about 1967 to 1982—five years of intense emotional struggle after my divorce, then ten more of transitional economic struggle just to return to financial stability—is this: Learning to compose, develop and print photos played a large part in my rehabilitation. It gave me the motivation to take the first step back into the real world. That hobby—if that’s all it was—along with the help of friends and various forms of therapy, were the devices I used to get myself out of the apartment door and out of my self-imposed solitude. Photography reintroduced me—by its nature forced me—back into the wider world of people and relationships. You can’t make photographs while sitting alone in dim light, reading and watching television. The purposeful social actions required for street photography—mixing with people, asking strangers if I might take their picture, etc.—was just what I needed to get back into the rhythm of a normal life. These days I like to think of those days as my time of therapeutic serendipity. Copyright © 2008 Jim Sizemore.

This entry was posted on Sunday, May 11th, 2008 at 11:56 pm and is filed under non-fiction, photography. You can follow any responses to this entry through the RSS 2.0 feed. You can leave a response, or trackback from your own site.

4 Responses to Family, Friends, and Neighbors