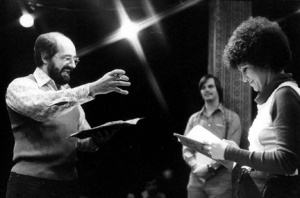 In this photograph my old friend Jacquie Roland (cartoonist, artist, actress, writer, etc.), on the right, is feeding lines to local actor Joe Cimino, who played the title character of “Zorba” in the Baltimore Spotlighter’s Theater production of that Broadway musical. Jacquie is the person I have to thank for introducing me to Baltimore community theater. In this case, she also introduced me to the Zorba director, who was kind enough to allow me to photograph his rehearsal process as part of my research into the mysteries of theatrical production. At the time I was teaching myself—with the help of a bunch of books, museum visits, and one pro friend—to produce photographic images, so this was an opportunity to combine two of my top interests. Technical note: the “starburst” effect of the light between Joe and Jacquie is pure photographic artifice, created with a filter which screws onto the camera lens.

The clear glass filter has an inlaid grid of thin wires which creates the flare effect by, I assume, bending the light rays. The amount of flare can be adjusted by simply rotating the filter a bit this way or that. In the image above it appears that I had the filter set for the greatest possible dramatic effect. This smaller image is an example of a shot made during the same rehearsals but on a different day and without the filter. Except for the lively (and sexy) acting of Joe Cimino and Audrey Herman, Spotlighter’s founder, this image lacks sparkle, huh? Copyright © 2008 Jim Sizemore.