BOB WEBER—God I love that man!

The above title was applied by my old pal Jacquie Roland to her delightful anecdote, below. Her comment/memoir was triggered by my recent “Return of the Moose” post about Bob Weber’s classic “Moose Miller” comic strip, but in my own little “comedy-of-errors” blog world her words somehow became attached to the wrong post, disconnected, out of context, hidden away where folks were unlikely to see it. The story she tells is way too good to miss (including the Mad Magazine’s Sergio Aragones teaser at the end), so I asked Jacquie to allow me to publish it straight out. She agreed. And, also with her permission, I’ve illustrated Jacquie’s tale with a few “dress up” photographs I made of her back in the day. I like to think that her outfit and makeup in these images serve as a visual metaphor for how she may have felt that day in the streets and elevators of the Big Apple. (Click on the color thumbnails for larger views.) 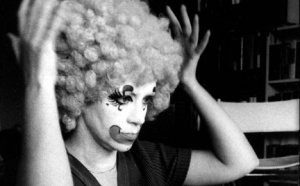 Because of Bob I got my first paying gig as a commercial artist. I was a young “Balti-moron” living in Canton. I had moved there from Dundalk, another garden spot of the city. I had managed to get a cartoon or so published, and joined the Magazine Cartoonist’s Guild in New York. ( There was a world of effort behind that sentence.)

To tell the truth, going to NYC on my own was terrifying, but I was determined, and on one Wednesday “Look day”, in my cutest outfit, I traipsed on up to New York,

cartoon markets in the morning . . . and a MCG meeting after noon . . . Most of the magazines where I wanted to show, were in kind of grungy neighborhoods. Half of the folks on the street looked either homeless, or drunk or both. (I admit to being nervous as a cat.) . . . In any case, I soon realized that the editors weren’t the only ones who were “seeing” me. Everywhere I went, I began to notice a REALLY big guy . . . and after a few times, I could see that he was “stalking” me. He began to frighten me so badly, that I told an editor about him . . .

I didn’t want to call the cops, because I didn’t want to miss my MCG meeting . . . but I was terrified . . . The editor gave me good advice . . . he said that the city was full of wackos, but since the guy hadn’t tried to approach me, the best thing to do was . . . not make eye contact, and if he tried to get me alone, say . . . jump on an elevator with me or something . . . to shriek my guts out . . . Sounded like a plan. At my next appointment, I had just gotten on the elevator, when out of nowhere, this HUGE hand shot between the doors . . . and THE GUY jumped on . . . it only took me seconds to give one of the best impersonations of Maria Callas I had in me. I don’t know who was more upset . . . me or the guy . . . I jumped out . . . The elevator doors closed & I fled to the safety of The Magazine Cartoonist’s Guild meeting . . . Whew!! When I got there, amid the general hubbub of the pre-meeting Meet & Greet I was telling my tale of horror. There weren’t many women cartoonists in those days, and I was more than flustered and soaked up their concern like a sponge… I was safe.

They would take care of me. All around me were these great guys, laughing & telling jokes . . . it was heaven. Behind me another group came in, they were very boisterous, and one of the guys in my group said that it must have been a day for crazies out there… that Bob Weber had gotten on an elevator where some crazy broad lost it and started screaming . . . Yup! When I turned around, and we recognized one another we both screamed “YOU!!!!”

Turns out that my “stalker” was just another cartoonist, being seen by the same editors I was seeing, on “LOOK DAY.”

Despite that unfortunate meeting, Bob & I became friends, and when I needed a job reference, Bob was kind enough to give me one . . . and because everyone in Baltimore knew MOOSE . . . I got the job. Bob is a really nice guy . . . a GREAT, BIG, NICE GUY.

(I may have embellished the above story a little bit, but that’s the way I remember it . . . kind of like that time that Sergio Aragones nibbled on my neck and I swooned . . . actually I fell to the floor . . . but that’s another day, another cartoonist, and another story.) Copyright © 2008 Jim Sizemore.

This entry was posted on Friday, May 30th, 2008 at 9:17 am and is filed under cartooning, illustration, non-fiction. You can follow any responses to this entry through the RSS 2.0 feed. You can leave a response, or trackback from your own site.