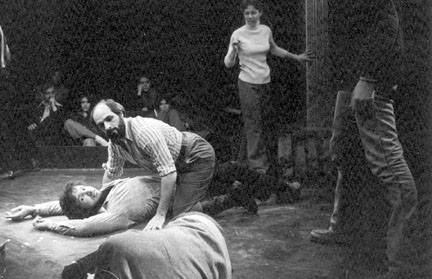 It’s not what you think. The guy flat on his back on the small stage of Baltimore’s Spotlighter’s Theater is Tom Karras, director of the play “Zorba.” On top is Joe Cimino, playing the title character. They’re rehearsing for a community theater production of the Broadway musical. Tom is choreographing a fight scene, demonstrating how he wants part of it done. They’re working in the tiny space the director and actors call their “postage-stamp playpen.” To avoid injury, theatrical action that requires violent movement must be carefully planned in the best of circumstances, but it’s even more important when the stage is “in the round.” In that situation the audience is seated on all sides and within in easy reach of a thrown punch or a sword thrust. There’s no sword play in “Zorba,” but in the background here you see the waiting actors observing from front row seats. During the performance that’s how close some of the paying customers will be to the action. (Although it’s discouraged, at Spotlighter’s it’s not unusual to see audience members with their feet resting on the apron of the stage.) On the other hand, the limited space makes the job of the production photographer somewhat easier, with great opportunities for closeup shooting from more angles. When covering action scenes like this one I discovered that the trick was to wait until there is a pause in the movement at the apex of the action. This is the moment that suggests what went on before, and what might happen next. I composed this image so that the drama takes place in a pool of light off to one side of the frame, with less important elements fading into darkness at the edges. The light—or lack thereof—becomes the device that frames—spotlight’s—the action.

Below is another “pool of light” shot, this one of Audrey Herman, theater founder and actress, script in hand, awaiting her cue. (Click on the image for a larger view. Product placement alert: The can of Coke.) Until her death in 1999, Audrey was the driving force that kept one of Baltimore’s oldest community theaters alive and producing interesting plays twelve months a year, year after year. And even today at Audrey Herman’s “Spot’s” everybody knows there is one theater season — and it never ends.

This entry was posted on Monday, June 2nd, 2008 at 9:38 am and is filed under non-fiction, photography, theater. You can follow any responses to this entry through the RSS 2.0 feed. You can leave a response, or trackback from your own site.