Over fifteen years, I presented a one-hour program called “Cartooning for Kids” at libraries and schools in the Maryland, Delaware, Pennsylvania and Virginia region. The target group,” as described in my promotional materials, was six to twelve year old children. During the same period, 1991-2006, I also offered extended workshops (three to fifteen hours) for groups of elementary, middle and high school students.

An exercise I employed at the start of each of the older group’s workshops, and one that I found to be very effective for getting them involved in the program quickly, was to ask what basic shapes Walt Disney began with when he drew Mickey Mouse?

Not a tough pop quiz, nor was it intended to be. The kids always replied quickly, loudly and in unison, with cries of “circles!” At that point I would write the title: “Bad Mickey” in large cartoon letters on the chalkboard, or on my easel pad. The brief delay intrigued them, pulled them deeper into the program. Then I would go on to explain that we would use circles to make our own version of the famous mouse, but cartoon mouse that would give Walt nightmares if he were still alive. The one rule was this: We weren’t allowed to use “perfect” circles. Our circles—or ovals, or even shapes that wound up being rectangles—had to be stretched, bent, bloated, blown up, squished, squashed, smeared—anything, so long as they were 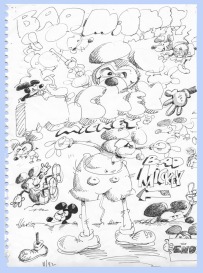 distorted in some way, and the more grotesquely the better. (Very early-on in my teaching career I discovered that kids — especially teens — enjoy a bit of “edge” to their education.) These three sketchbook pages will give you an idea of the images that resulted when be began by using basic shapes that were themselves bent out of shape. Those unique proportion-shifting building blocks became a device to create cartoons that helped us claim “Bad Mickey” as our own creation.

This entry was posted on Saturday, June 14th, 2008 at 8:51 am and is filed under animals, cartooning, film, kids. You can follow any responses to this entry through the RSS 2.0 feed. You can leave a response, or trackback from your own site.