My Wife Thinks You’re Dead was inspired by a clever county song of the same title, written and performed by Junior Brown. When I heard Mr. Brown’s lyrics (he was on Curb Records then, these days he’s with Telarc—click the “Junior Brown” sidebar link to hear samples), it occurred to me that the best country songs tell a condensed tale which, with a bit of imagination, can be spun out into a short story, a play, or perhaps even a novel. I’m working on several other stories which use country songs as a starting point, but so far this is the only one I’ve been able to complete. My Wife Thinks You’re Dead will post in four parts, today through Thursday. 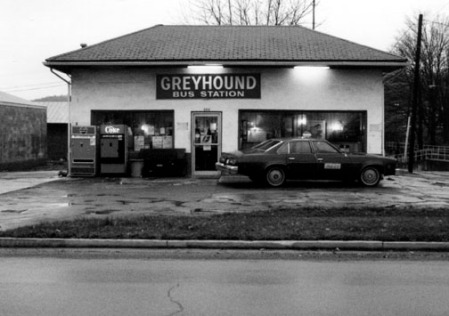 When Betty got back in town the first thing she did after she stepped off the bus was corner Bernie, which would have been fine had his wife not found out. Betty, a petite stringy-haired blond with a firm body—parts of which were decorated with tattoos you could fully appreciate only when she danced naked to hillbilly music in your living room—had just been released from Goochland Correctional Center, a state institution for women who do stupid things. She was the sort who spent her tragically short life involved with drugs, the wrong kind of sex with both sexes, and serial breaking and entering escapades to raise money for pharmaceuticals. Betty could not resist a fun evening, never mind the consequences.

On this particular day Betty planned to “accidentally” run into her old pal Bernie on his way to the post office, a trip she knew he made like clockwork. She had his schedule timed to the split second, so when Bernie turned off Main onto Market Street they collided before he had a chance to avoid his fate. Betty also knew that once they made physical contact, Bernie would be hooked like a mountain trout, a fish that exists with only one purpose—to be pan-fried for supper. “Damn,” Bernie said, and stepped back and looked Betty up and down three times.

She batted her eyes in fake surprise and played him out. “How you doing, Bern?” Of course Betty knew damn well how he was doing—she knew that the second Bernie saw her he most likely got a boner on. “Not bad for a failure,” Bernie said.

“Now, girl, you know I’m happy married. When you disappeared off the radar, I up and told my wife I heard you was dead.”

“O.K.,” Betty said, “if that’s how you want it,” and she flounced off down the sidewalk with that sway-sway walk that Bernie loved to witness.

As Bernie stared after Betty, the one thought in his brain was that with her on the loose he needed the strong reminder of his family to help him resist temptation, so he went straight home. Bernie appears old for his age, not all that much to look at, chubby-soft, balding in the worst way—front to back—and he has mild prostate trouble, which points him to the bathroom a bunch of times each day. His wife loves Bernie more for his kind nature than anything physical. Just picture it, here’s this forty-seven year old manager of an auto parts store who lucks out and lands a beautiful young wife, Helen, to share his bed and keep the house spotless. They have two little kids—boy and girl—just the cutest things. Each Sunday morning he drops his perfect family off at the Holiness church and waits in the car, reading the sports pages. Bernie considers himself reformed from his wild days, but not yet ready for religious instruction. And he thinks of Helen as an angel, soulful and so pure he feels extra guilty about the level of lust he still has for Betty.

Back in the old days, Betty saw Bernie as a cocksman pure and simple, one big hot-to-trot party penis with plenty of money to spread around. Yeah, that was his special appeal when they were burning up the highway, hitting one roadhouse after the other, always winding up as a big ball of naked flesh in some borrowed bedroom or the back seat of a car in the darkest corner of the Wal-Mart parking lot. Betty was looking forward to more of that.

This entry was posted on Monday, July 28th, 2008 at 1:51 am and is filed under fiction, short fiction, short story, writing. You can follow any responses to this entry through the RSS 2.0 feed. You can leave a response, or trackback from your own site.

One Response to My Wife Thinks You’re Dead