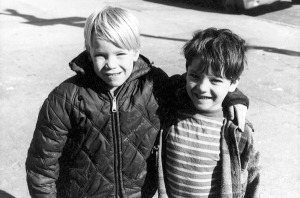 Back in the days when I was doing natural light street photography in South Baltimore (in squint-producing sunlight on this occasion), just about the only challenge I had was how to frame the image. When these boys spotted me and my Minolta they struck a pose and one of them yelled, “Hey, mister, take our picture!” With kids, I usually tried to lower my point of view so I was on their eye level, but if I had done that here I would have had a clutter of background cars, buildings and telephone poles to organize visually. Since those things added nothing of value to the image, it was not an option. With backgrounds, the ideal is to have large simplified shapes, so I stood erect and shot down at the boys and the sidewalk. Shooting either up (“worm’s-eye view,” ceiling, sky, or a forest canopy) or down (“bird’s-eye view”, floor, sidewalk or street) is a good way to eliminate unwanted visual clutter. In this image we still see a bit of curb, chewing gum spots on the pavement, and a pole shadow cutting diagonally across the top of the frame. But that’s fine; it’s just enough background detail to suggest an urban context, but no more. Copyright © 2008 Jim Sizemore.