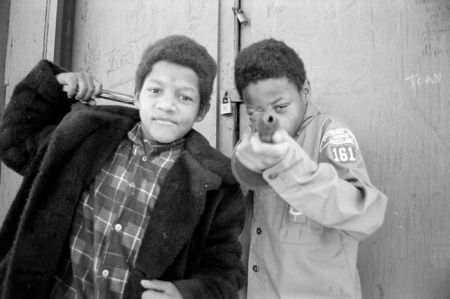 The winter of ’72 was a busy time for me as a street photographer in South Baltimore. In the Mid-Atlantic region we have fairly mild winters, some warm days even through December, January and February, and of which city kids can be counted upon to take full advantage. We certainly did when I was growing up in the neighborhood during the ‘40s and ‘50s. (Judging from my ‘70s photos it was still true then.) City streets and sidewalks absorb and retain heat from the sun, and when you add to that windblocking buildings, urban areas are usually at least ten degrees warmer in winter than otherwise would be the case, which of course means that we kids had that much more outdoor play time. On any warm sunshiny day—even some pretty cold ones—we spent as much time as possible exploiting the vast concrete and tar-paved playgrounds that began a few steps outside our doors.

I spotted these ’70s kids on South Hanover Street in my old neighborhood and was attracted to their play-acting antics, which reminded me of my own “pretend” exploits twenty-five or thirty-five years earlier. (For some of us, at least some of the time, nostalgia can drive creativity.) After giving me permission to shoot, and while I snapped a few frames, they “shot” back at me with their toy guns. Throughout the session we exchanged tough guy military movie dialogue; and we stayed “in character” the whole time. What I find interesting these days is the startled reaction of some (actually most) adults viewing these images for the first time. I guess the fact that the boys are brandishing toy guns makes them uneasy; but it’s understandable since they weren’t there to witness the playful context. Understandable, but somewhat sad. And usually, until I point it out, these same adults fail to notice that the lad on the right is wearing a boy scout patch on his shoulder. (Click images for larger views.)

This entry was posted on Tuesday, September 9th, 2008 at 3:17 pm and is filed under kids, photography. You can follow any responses to this entry through the RSS 2.0 feed. You can leave a response, or trackback from your own site.