An Avenue of Fire 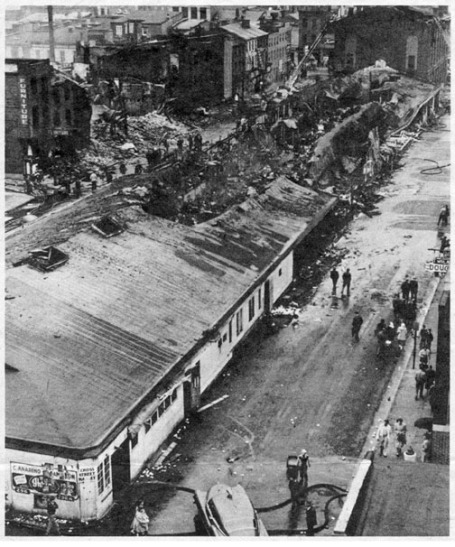 On May 19, 1951, most of the Cross Street Market in South Baltimore burned to the ground, and the one third or so of the structure left standing was gutted. The fast moving blaze left Cross Street between Light and Charles Streets a pit of smoldering rubble. To my young eyes (I was 13 at the time), the aftermath looked like what I’d seen in movie newsreels of bombed-out European cities during World War II. The above newspaper photo shows the area on the morning after the fire. Firemen’s ladders are at the roof of the community hall, top right.

In 1951 I sold newspapers near the east entrances to the market, on the corner of Light and Cross Streets. The newsstand was in front of a bank, the roof of which can be glimpsed jutting into the bottom right corner of the photo. (There’s still a bank on that corner, which I use.) I often took my supper at one of the snack counters in the market, and my family, like most who lived in South Baltimore in those days, did their shopping there and in area stores. Then, as now, the commercial district in South Baltimore was arranged in the shape of a capital “I,” with Light Street being the top (east) horizontal bar, and Charles Street the bottom (west) and the market itself forming the long vertical down the middle of Cross Street. Then, unlike now, the market was constructed of wood and was anchored on the Charles Street end by a two-story brick community hall. On Saturdays police blocked traffic from Cross Street on either side of the market so merchants could set up temporary outside stalls. The market doubled in size on those days and there was as much activity outside the long, low shed as within. First light found sellers unloading trucks of fruits and vegetables and piling crates of fish, baked goods and poultry on the sidewalks. They posted signs, arranged displays, shouted orders to their employees and greetings to their competitors. Soon the shoppers began gathering from every direction, funneled into the market area by the narrow neighborhood streets. It was beautiful scene—teeming and festive—like a huge block party.

Early that Saturday morning in 1951—around 1:30 A.M.—the market night watchman discovered the fire. The flames had already consumed most of a wall just above a row of overflowing refuse cans in the fish market end of the building. The watchman ran to the fire firebox at the corner of Charles and Wyler Streets and sounded the alarm. “By the time I got back,” he was quoted in a newspaper interview as saying, “almost the whole thing was gone.”

When the fire started I was at home asleep. My older brother woke me and we ran the four blocks from our rented home at 807 William Street to the spectacle. We watched as the flames raced along the recently tarred roof of the block-long market building like an enormous fuse. The tar bubbled and popped as it heated and turned first to liquid, then to acrid black smoke, which blanketed the area and reduced visibility to less that 20 feet at times, depending on the breeze. I noticed that the blaze cast an eerie orange glow against the smoke and low clouds. Soon we heard a loud explosion on the south side of the market and all the electrical and telephone lines in the area went dead. My brother said it was a transformer blowing up in the intense heat. Sparks and small pieces of burning material flew through the air and landed on residential and commercial buildings south of the market. Homeowners were on their roofs pouring water on small fires. By 3 A. M., the flames had dropped down into the market building and within minutes the roof caved in, the walls collapsed, and Cross Street became an avenue of fire.

Flames from the upper floor of the community hall, a large 1871 Italianate Revival-style building, with arched windows and fancy brickwork, shot halfway across Charles Street toward the Garden Theater. Salvage Corps members entered the hall to drag out sleeping men who used the building as a flophouse. (In those pre-politically-correct days we called men who drank too much and slept wherever “winos” and smoke hounds.”) Rats, also occupants of the burning structure, deserted their nests and scampered through police lines and disappeared up dark alleys and into sidewalk crevices.

By dawn the fire was extinguished. According to the news reports, it had taken 12 alarms and hundreds of firefighters manning 70 pieces of equipment over six hours of furious activity to do the job. There were no deaths, but six firemen, one policeman and at least three volunteers were injured. An estimated 100 people who lived on Cross Street between Marshal and Patapsco Streets were now among the homeless. Two hundred and forty-seven stall owners or operators were put out of business. The market was a complete loss, as were 13 buildings on the south side of Cross Street, and many others in the area were damaged by the intense heat, flames and water. Inspecting the rubble, the Food Control Department found and condemned 6,500 pounds of meat and dairy products spoiled by the fire. The fire actually destroyed tons more. Less than one ton of foodstuffs was saved—including a box of fish found under the debris. By some strange quirk, the ice preserving the fish had not melted. In an interview, Benjamin Taylor, who operated four meat stalls in the market, claimed to have lost all his Saturday stock plus $700 in cash. Only pennies remained, he said, and estimated his total losses at about $10,000. J. L. Harvey, operator of a butter-and-egg stall in the market for 69 of his 81 years without a vacation (“Now I’ve got a vacation,” he said, “and I don’t want it”), had about $60 in a wooden box in his stall. All he recovered was a handful of pennies, nickels and quarters, and a bunch of hard-cooked eggs still warm to the touch.

About half of the stall keepers found temporary business locations nearby, others set up curbside stands along Cross Street, and still others went out of business for the duration. The “duration” turned out to be 18 months to the day. On Saturday, November 19, 1952, Mayor Thomas D’Alesandro, Sr. (now better known as the father of Nancy Pelosi, Speaker of the House), witnessed by 20,000 celebrants—including my brother and me—dedicated the new steel and cinder block  Cross Street Market. Eventually a 10-year-old boy was found guilty of setting the multi-million-dollar blaze. In court the boy, a chronic delinquent who was later sent to the Maryland Training School for Boys, explained his behavior by saying, “Something just tells me to do it.”