Blind John at the Movies

The Day the Earth Stood Still 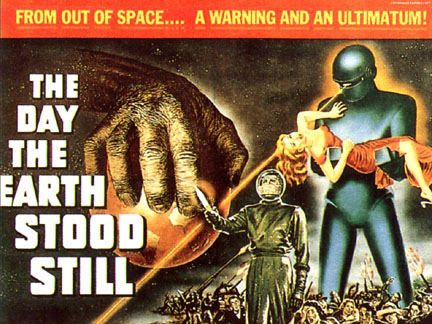 The 20th Century Fox remake of the classic 1951 science fiction movie, The Day the Earth Stood Still, opens December 12, 2008. When I was growing up in the early 1950s, the original film was a must-see for boys my age (12 at the time)—and now, nearly 60 years later, I expect the new version will have the same power for kids of this generation. My love for the movie inspired a scene in an unpublished novel. In my tale the protagonist and first-person narrator, on the recommendation of a fellow newsboy, takes a blind schoolmate to “see” the movie. Here is an edited version of that scene:

Wilson said I had to see it, so when Blind John asked me to go, I went. Wilson claimed that The Day the Earth Stood Still was a bombshell movie to hit Baltimore. He said after I saw it I’d understand why we had to duck under our school desks once a month for atomic bomb practice. “Also,” he said, “Billy Gray is your twin brother, right down to the freckles and messy red hair.”

In the movie a flying saucer from space lands in Washington across from the Capitol Building. It comes down with crazy music and gets surrounded by Army guys with guns. I put my mouth close to Blind John’s ear and whispered, “It’s night. Beautiful shadows. The flying saucer is silver and—” Blind John cut me off with a little grunt. Next thing in the movie a nervous soldier shoots the alien guy in the shoulder, and the alien’s robot, Gort, disintegrates their rifles. The tall alien tells a government man, “We have come to visit you in peace and with goodwill.” His name is “Klaatu” and he sounds like a radio news guy from England. “I merely tell you the future of your planet is at stake.” He also says, kind of snotty, “I’m impatient with stupidity. My people have learned to live without it.”

Later—Klaatu escapes from the hospital and goes to live in a rooming house with Patricia Neal and Billy Gray so he can learn humans better. Klaatu tells her his name is Mr. Carpenter and she believes it. I whispered to Blind John, “You can tell she likes him.”

“It’s that background music,” Blind John said, “plus the music in his voice—she lets him seduce her with it.”

“But he’s an alien from outer space!”

Pretty soon Klaatu—Mr. Carpenter—he stops the electricity in the whole world for thirty minutes to teach us a lesson. The crazy music comes back. I told Blind John how the pictures showed everything on the planet screeched to a halt, but he just sighed. “Patricia Neal looks worried,” I whispered. Blind John squirmed in his seat. We both stayed quiet until the part where Klaatu gets shot again. “Patricia Neal looks sad,” I said. And then, all of a sudden, Blind John threw a handful of popcorn in my face, popcorn I had paid for out of my newspaper money. “Why’d you do that?”

“I ain’t deaf! I know from her voice and the music how she looks.”

Klaatu tells Patricia Neal to run to the space ship and say to the robot, “Gort, Klaatu barada nikto!” She asks Mr. Carpenter what it means but he says never mind and dies. Later Gort brings Mr. Carpenter back to life on the spaceship. At the end Klaatu makes a big speech to warn us to be good before it’s too late. The movie had real good shadows but didn’t make sense. If we were about to blow ourselves up with atomic bombs, why would Klaatu want to burn us up to save us? But at the end Blind John was on the edge of his seat and had a tight grip on my arm, one fist at his mouth. “Beautiful!” he said. “Patricia Neal was transformed!”

“Big deal,” I said. “Her guy gets back on his spaceship and leaves.”

“Yeah, but now she feels loved.”

I shrugged. “Didn’t get that part.”

As a huge fan of the original The Day the Earth Stood Still, I can only hope that the remake at least comes close to measuring up thrill-wise, but realistically I know that Hollywood doesn’t have much of a positive record in that department (think Psycho, etc.). We shall see. Copyright © 2008 Jim Sizemore.

This entry was posted on Monday, November 10th, 2008 at 5:29 pm and is filed under acting, actors, fiction, film, kids, movies, writing. You can follow any responses to this entry through the RSS 2.0 feed. You can leave a response, or trackback from your own site.

One Response to Blind John at the Movies