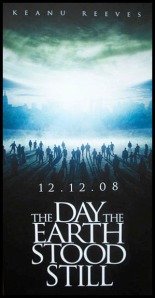 Judging solely by the graphic qualities of these two posters, which one would more likely entice you to see the movie it represents—the original design from 1951, or the promo for the remake, which opens Friday, December 12, 2008? Click images for larger views. To vote (and perhaps tell us why you prefer one more than the other), click the word “Comments” below. The poll results will appear as an addendum to this post on December 3.

Poster Poll Results: There were a total of 14 responses to my query—three as direct comments on the 11/26 post, and the rest via e-mail. (And, because of the small sample, let’s assume an error rate of 97%, give or take.) The ballot breakdown is thus: Only one person, a friendly contrarian, voted for the new poster design. That means that the other thirteen voters—including me—like the old poster better. (Judging solely by the few clips I’ve seen, I think it’s safe to say that most of us will feel the same about the remake of the movie itself—but we’ll leave that discussion for another time.) Personally, aside from the unimaginative composition, mundane font selection and symmetrical layout, the thing that rankles most about the contemporary poster design is its lack of human juice. It’s cold. Even the Speilberg back lighting trick to create “drama” has been used so often it’s a visual cliche. (Sigh—they just don’t make movie posters (or movies) like they did in the good old days! I know, I know—I’m a curmudgeon.)

This entry was posted on Wednesday, November 26th, 2008 at 2:31 pm and is filed under film, graphic design, illustration, movies. You can follow any responses to this entry through the RSS 2.0 feed. You can leave a response, or trackback from your own site.