In April and May of 1977 I was depressed over the breakup of a long-term relationship, which was not an unusual situation for me in those days. An abiding interest in 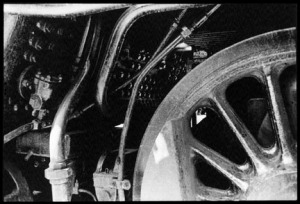 photography was the tool I selected to, if not cure the malaise, to at least divert me from my sad-sack self while I decided if I needed to seek professional therapy as an individual, or in cheaper group sessions with an odd-ball collection of other interpersonal failures. But I digress.

The “train project,” as I

came to call it—photographing vintage rail cars at the Baltimore and Ohio Train Museum in Southwest Baltimore—was one I had thought about for several years. Each time I had taken my two very young sons there—I saw them every-other weekend on court-approved visits (their mother and I had divorced in 1967)—I would think about photographing parts of the rail cars, treating the smaller sections as abstractions,

isolating areas to create compositions based on the size and shape relationships of the various elements—the pipes, levers, armatures, wheels, etc. The idea was to reduce the massive machines to circles, rectangles, triangles, and so on, visually “de-constructing” the cars. It was a post-modern photographic concept before I knew what the term meant.

In this digital age it is

quaint to note that back then—in ’77—we made our photographic images by exposing rolls of chemically treated acetate film and developing the exposed frames in chemicals mixed (in my case) in a tiny “dark room” set up in the kitchen area of my three room apartment.

contrast, in which the images were reduced to basic black and white with only a few middle tones. To get that effect I relied on fast film (Tri-X), which I exposed in bright sunlight (for the juicy shadows), and at high shutter speeds, then printed on very high contrast paper. All the rail car shots were composed “in camera” and printed full-frame. Whether or not I managed to make “art” with my artsy-fartsy approach

may of course be debated, but I have no doubt that the activity worked well for me as “art therapy.” At the very least, it got me through a bad emotional patch and on the path to the more conventional help. (Click images for larger views.)

To purchase reprint rights for the photographs above, or for others in the series not shown here, contact me for information about fees, which will vary depending on how the image is to be used. My email address is: jimscartoons@aol.com

This entry was posted on Wednesday, December 10th, 2008 at 4:45 pm and is filed under photography. You can follow any responses to this entry through the RSS 2.0 feed. You can leave a response, or trackback from your own site.