Confessions of a Camera Bug 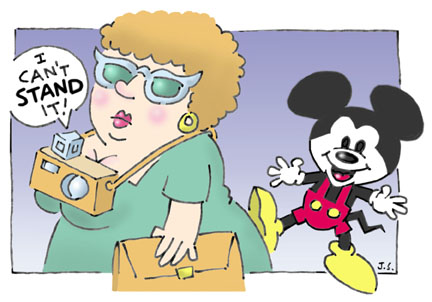 My name is Asher. You don’t know me but it’s about time you got to. Us bugs who live in cameras are at the mercy of your readers—so-called photographers who always talk about “different angles” and such when in fact they can’t see nothing that doesn’t happen in the viewfinder of their camera—I mean about real life. Maybe hearing about my past history will wise them up some.

Right now I’m living in a Nikon but it ain’t always been this soft. In fact, when I was growing up (in a Hasselblad) things got to be downright tragic. See, my dad liked to tinker around up in the shutter release housing—as much to get away from us rowdy kids as anything. Anyway, he was bouncing on some sort of spring one evening when the “arty” type camera owner decided to do a time exposure of a snow scene at twilight. Dad was punched to death by the first plunge of the cable release. The mess that resulted jammed the shutter and it never did work right anymore. Mom said we had to move on to escape the bad memories—and the wrath of the snap shooter.

We relocated in a big old view camera belonging to a certain Mr. “A.” (I can’t write out his name because he was a big deal landscape guy and thought very highly of in ecological circles to boot.) One day while he was setting up a shot of a pile of rocks in Maine, Mom was munching on his diaphragm—the one in his camera. She claimed it was high-quality protein. Mr. A stopped down the lens and Mom got squished at f/64. Which goes to show when it comes to getting the picture they want, photographers have no consideration for anything else. Mom would be alive today if he’d settled for soft focus. We never did get all of Mom scraped off that diaphragm and Mr. A had to buy a whole new camera, which was poetical justice, says I. But I went into a depression after that— didn’t much care about anything. Popped tiny time pills and staggered from one camera to another with no discrimination.

Soon I was in the very depths of degradation, living in the camera of a sensualist! The picture-box this guy used was one of your reasonably priced SLR’s, but the way the dude handled it you couldn’t tell it from the higher-priced gizmos. All he shot was soft-focus-available-light art compositions of naked young stuff, if you get my drift. The guy always had at least two of them young lovelies hanging around his pad—plus his wife! It was a swinging scene, provided you could hack the company of a gaggle of skinny teen-aged girls with little on their bodies or in their minds. No matter—soon enough I had to leave anyway because I threw-up and clogged the mirror-action of the man’s brand new Minolta SRT-202. (For some reason I can’t stand the smell of a new camera.)

The weeks and months that followed was a blur of wandering. Once I even woke up in an Instamatic nestled between a fat lady’s boobs at Disney World—the very pits. I tried to end it all by frying myself on a hot flashcube but all it did was short out the battery circuit. That’s what finally decided me to shape up.

I’m sorta semi-retired now. It’s a much quieter life I lead in this Nikon than I have ever led before. The camera belongs to a former Life photographer who doesn’t get out much—mostly he just sits around and fondles his equipment and daydreams of past big-deal photo-essay assignments. And since he never uses his camera I can nap with no worry of being done-in by the film-advance lever.

Meanwhile, Mr. Editor, I hope you don’t think my only purpose in writing is to knock the guys and gals who expose their film and themselves for a living. No sir. While it’s true that I myself have it plenty good now, the fact remains I still got a bunch of relatives out there trying to survive under hostile conditions. So this missive is mainly to remind camera people to be more careful in the future—live and let live, so to speak. Us camera bugs may screw-up a mechanism from time-to-time, but we don’t go around steppin’ on photojournalists. And thanks for hearing me out. By the way, I’ll understand if you don’t have the guts to print this.

P.S. The guy who typed this for me only thinks he’s a photographer. In my book that’s almost as good as not being one.

Confessions of a Camera Bug was originally published in the November 1979 issue of Camera 35 magazine. The professional photographers Asher references in his “letter to the editor” were the real deal back in the 1970s, all very famous pros in the field. If you think you can name any or all of them, please share the information with us via a comment on this post.

This entry was posted on Wednesday, March 25th, 2009 at 2:25 pm and is filed under essays, fiction, humor, illustration, photography, writing. You can follow any responses to this entry through the RSS 2.0 feed. You can leave a response, or trackback from your own site.