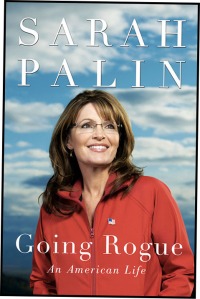 The following bit of dialogue was part of a conversation (political debate?) I overheard recently at a local diner. The brief fragment that I caught, while standing and waiting for my lunch buddy to show up, involved the recent publication of a very popular book by an unsuccessful candidate for high office. My friend arrived and we were seated several booths away from the young couple in question, but as we ate I could still hear their voices, now coming through as only a soft rumble. From the tone I surmised that the Young Woman continued to dominate, as she had in the snippet that I had earlier overheard. Here it is:

Young Man: What I can’t understand is why the press gives that jerk so much attention.

Young Woman: Well, let’s say that Katie Couric and all those other news hounds  had ignored her — how would you have known that she’s a jerk?

This entry was posted on Thursday, November 26th, 2009 at 7:25 am and is filed under media, writing. You can follow any responses to this entry through the RSS 2.0 feed. You can leave a response, or trackback from your own site.