Confessions of a Photographer’s Daughter
By Jacquie Roland

My career as a child model was short-lived but intense, and I hated every minute. I was the oldest 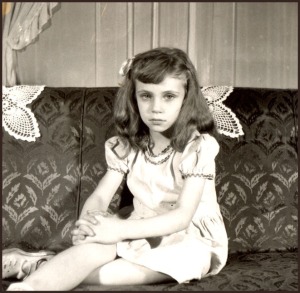 of too many brothers and sisters, a motley crew that today may generously be called “rug-rats.” When I was a child in the 1950’s, Shirley Temple was still the rage. You couldn’t open a magazine without seeing pictures of adorable, curly-headed moppets smiling out at you, usually with tiny kittens or fuzzy ducklings as props. My father wanted to be a photographer, but he didn’t particularly want to photograph children, especially his own somewhat scruffy brood. “Art ” photography (read “naked ladies”) held his interest, but having so many free mini-models close at hand finally developed some appeal—but only after my mother put her foot down. ( Or, in a manner of speaking, “up” a certain part of his anatomy.)

Before my father’s photographic mania struck in the ’50’s, our magazine rack held titles such as Modern Romance, Hot Rod—and, perhaps, a tattered EC comic book or two. After Popular Photography became his bible—or should I say his porn—the coffee table soon

overflowed with expensive subscriptions to Modern Photography and Camera 35, among others. He began taking pictures with a plain box camera. You know the one, black imitation leather and metal strips, a leather handle and strap, which you always kept around your neck. But while his kids wore hand-me downs and had too little to eat, my father’s camera bag slowly filled with bigger and better equipment—more expensive cameras, the latest and biggest lenses, tripods, light meters and various other esoteric photographic gee-gaws. Unlike his children,

these gadgets were meticulously cared for. Meanwhile, the front room/bedroom/living room/temporary photo studio was also filling up with the occasional young twit of a “model” behind the now-closed door. These bimbos were each determined to become the next Marilyn Monroe—willing and eager to strip, giggling as my father adjusted his lights and other equipment. During these “shoots” as he called them, my mother and I, and the rest of the kids, sat as quietly as possible—as ordered—in the back room/kitchen of our tiny three room apartment. During those sessions there was pain my mother’s eyes, and a “god only knows what is going on in there” look on her face.

Later, we all got to see what was going on when our only bathroom, which doubled as my father’s darkroom, exhibited 8×10’s and 16×20’s of the naked ladies, with occasional close-ups of their anatomical bits. WOW. ( We weren’t supposed to look, but of course we did.)

Large format black and white photos were laid out to dry on shiny rectangular dryers, the wet prints rolled slightly and held in place with something like a bungee cord. The photos, on their heavy matte paper, dried with a slight curve. Other finished prints and fresh negatives were clipped to a “clothesline” sort of arrangement over the tub. Three pans, for developer, fixer and a plain water rinse, lined the tub bottom. ( We kids washed up in the kitchen, at the sink.) Toilet paper was moved to make room for large brown bottles of smelly chemicals, and stacked plastic trays. Red and yellow bulbs in metal clip-on lamps were attached to where the curtain rod used to be, timers and tongs sat on the back of the tub. Interesting glass measuring jars marked in red increments topped the sink. Our three toothbrushes (his, hers, and the one for us kids) were moved to a cup on the floor, sharing space with a tangle of extension cords which covered the linoleum. Our tiny linen closet held black and yellow boxes of photographic paper and other supplies. (The family towels were now kept in the hall, rough dried and unfolded, in a laundry basket outside the door.) This made room for his enlarger, big and gray with an interesting bellows that sat in a corner, on wheels, rolled out of the way.

My father spent a lot of time in his darkroom. Locked on the inside, it was the one place with absolute privacy in the apartment. Sometimes he took one of his models in with him. He claimed that the “oohs” and “aahs” we heard must have meant that she was just appreciative of his work. Even at my tender age, I didn’t believe that for a minute. And god forbid any of us had to go to the bathroom while he was “working.” You either had to hold it or use the enameled slop jar kept in the middle room/ kids bedroom/storage area. I was proud that I could hold mine, but the younger kids often wet their pants. The only thing my mother held was her rage, and—knowing her temper—she kept it in check far longer than I would have expected. When the models began hanging out with my father in the living room with a beer, relaxing merrily after their shoot, while the rest of us were still banished to the kitchen, my mother decided that “art be damned!” (My words—hers were a LOT more colorful.) She had finally had more than enough. Later, after weeks of sturm and drang (blood and fisticuffs) and broken glass and spilled chemicals in the darkroom, the enlarger was repaired with black electrical tape, and my father’s “focus” finally took a turn. The naked ladies went elsewhere. That was when we kids became his models.

Now my father’s problem was—well, it was me. I was no Shirley Temple. And try as he might, threaten me as he did, he couldn’t turn me into her. The photo shown here, dated 1950, was taken just after he actually beat the bejesus out of me because I wouldn’t smile, and was wasting his film. The more he yelled, the more morose I became. Twisting my arm only got more of the same, plus tears. The cheap blue nylon party dress I was wearing rapidly lost it’s crispness as he just as rapidly lost his temper. My mother matched his nasty mood and in the fracas my dress got yanked out of shape and I lost one of the bows in my hair. My mother had to iron another dress, the one you see here ( it was in the basket with the towels) so that my father could finish out the roll with me wearing something, at least. She also ironed my hair because my long “sausage curls” had to be fixed. Because I wouldn’t hold still, she pushed the tip of the hot iron into my back and said, “NOW you’ll smile, won’t you?” Still I didn’t. Or couldn’t. Or wouldn’t. She finally gave up and wiped the tear stains off my face as I sat there in my ratty little homemade green dress with the stupid rick-rack, hating them both. But I despised the “photographer” most of all because he had made me wet myself. We finished the rest of the roll, damp little me sitting on a towel to keep from staining the sofa. My mother helpfully said that I was beginning to look like a zombie. The photo you see here was the best of the bunch, and ended up being my “before” shot. You wouldn’t have wanted to see the “after” one, or the smile from hell I learned to perform on cue. Later on that night, while I was on the floor, I found my missing hair bow, pee-stained, under the sofa with the dust bunnies.

My father entered photographs of my younger brothers and sisters in every contest he could find, and I had become old and ‘useless’ as a model at age seven. After a while—as much as I still hate to admit it—his photos got to be pretty good. Several were excellent. But as far as I know, my father didn’t win any contests, or make any earnings with his photography. Money was his criteria for success. But as I’ve learned, art has its own criteria, and the work itself is what drives us. Often, it’s the only reward. Some how—in spite of the fact he didn’t deserve to—the miserable bastard actually became a photographer. Here I’m remembering an incident where he beat me with his fists and a belt. No wonder I thought then that he didn’t deserve to live, let alone be successful at the one thing he loved. But he did live and was successful—at least in a creative way—and life isn’t fair. So just shoot me.

This entry was posted on Monday, January 18th, 2010 at 7:47 am and is filed under essays, kids, marriage, non-fiction, photography, relationships, writing. You can follow any responses to this entry through the RSS 2.0 feed. You can leave a response, or trackback from your own site.

One Response to Just Shoot Me