That was my shout-out in 1950s South Batimore as I sold daily newspapers for a nickel a piece. My cut was a half-cent each, which meant that if I unloaded twenty a day, five days a week, I’d earn fifty cents for the effort. Now, I know that weekly half-dollar doesn’t’ sound like much, but you have to put it into perspective. For a kid today, having a paltry fifty cents in his pocket is the same as being broke. But in those days a nickel would buy me a Coke. A dime would score a hotdog. Ten cents was the cost of admission to a Saturday movie matinee, and candy bars were only a nickel each. So, compared to most kids I knew, my weekly earnings actually put me in a relatively enviable financial position when Saturday rolled around and it was time to take in a Roy Rogers or Gene Autry show at the McHenry or Beacon theater on Light Street.

My family wasn’t exactly poor, but there was no such thing as “extra money” around the house—unless it was for a pitcher of beer or a pack of cigarettes for one of the adults. But there were Christmas cards and birthday cards with a quarter and, occasionally, a buck in them. However, a regular allowance was not possible, so I sold newspapers, collected and sold “junk”, shined shoes, worked on fruit and vegetable wagons (the men who sold from those colorful horse-drawn wagons were called “Arrabers”) and I hauled groceries from the local supermarket for nearby residents.

When I was busy selling newspapers I worked from the corner of Light and Cross Streets in South Baltimore and “hawked” the papers from a bundle I carried under my arm. It was pure hustle. I’d walk the streets around Cross Street Market and hop buses, moving from the front to the rear exit, calling out “Gitch’er papers here!” flipping them from the bundle as requested, my palm up to receive payment, then making change from my jeans pocket, being careful to return small coins—nickels and dimes—hoping to encourage a tip. I’d get off the bus several blocks from where I got on and catch another one in the opposite direction. I had learned early on that if I wanted spending money, I could only depend on “me, myself, and I” to get it.

The old Cross Street Market, a wooden shed that burned down in 1951 and was replaced by the current concrete block building in ’52, is about six blocks south of the trendy tourist attraction that it is today called the “Inner Harbor.” Heading north from the market on Light Street today’s spiffy harbor area was not even a figment of anyone’s imagination in the early 50’s. On the left (west side) of Light Street towards Pratt Street, was the McCormick Tea and Spice Company, makers of Old Bay Seasoning®. No self-respecting Baltimore steamed crab eater would think of using anything but Old Bay on their crabs. Or, they’d sprinkle it on their shrimp and fish. It was—and still is, as we say in Baltimore—a “Balmer” thing.

On the east (harbor) side of Light Street were decrepit, abandoned 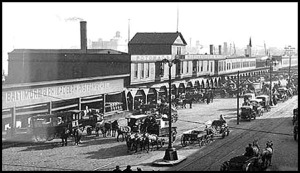 and rotting warehouses and piers. I can remember stories about the terrible things that could happen to kids in those old buildings. Whenever I passed through that section at night, I always made sure that I was on the “safe” side of the Light Street. Even so, I recall the trepidation I felt being alone there at night with few streetlights and deep shadows, sinister shadows that reminded me of the nefarious doings of Boris Karloff or Lon Chaney in the horror movies I’d spent my earnings to see.

Going south from Cross Street Market on Light Street was the old South Baltimore General Hospital, a jewelry store, a clothier, one or two shoe stores, a hardware store, two drug stores, a second five and dime store within the space of three blocks, and a restaurant or two. It was a great little shopping area that attracted tons of foot traffic and was an excellent place to peddle newspapers. So, long after the Federal Hill area had become decrepit, and long before the area was gentrified, I spent my money where it was appreciated—with the Cross Street Market area vendors—at the lunch counters and candy counters of Murphy’s five and dime—and, of course, at the movie theatres.

Meanwhile, at home occasions sometimes arose when an adult in the family would find it necessary to appropriate the money that I had worked so hard to earn. Once I remember being in the University Hospital for a hernia operation when my father (who at the time had been divorced from my mother for several years) came to visit. After about ten minutes he was ready to leave and only paused to ask if I had any money. I told him I had a couple of dollars and he asked to borrow it. He promised to pay me back on Friday, after he got paid. It was nearly three years before I saw him again.

Yep! Things sure were different for an ambitious boy back then. Not to go too “old school” on you, but if you weren’t a kid in those days, I doubt if you can appreciate how far half a buck could take you.

He has been writing physical security related articles since 1991. Seventeen years ago, Jake wrote his first article for the National Locksmith Magazine and has been their technical editor for fifteen years. Pure Jake Learning Seminars©, his nationally conducted classes, are designed for locksmiths and professional door and hardware installers. For more information, click the “Pure Jake” link in the sidebar blogroll and under the “business” label. (And to read about Jake’s adventures as an “Arabber’s” assistant, see a short piece on the subject posted September 14, 2009 on this blog.)

This entry was posted on Friday, April 2nd, 2010 at 7:43 am and is filed under essays, kids, movies, non-fiction, writing. You can follow any responses to this entry through the RSS 2.0 feed. You can leave a response, or trackback from your own site.