I don’t remember exactly how old I was when I learned to tie my shoelaces—probably five or six—but it was my paternal grandfather who taught me how to do it. I do remember that training my fingers to perform the intricate contortions necessary to accomplish the task was stressful. Intellectually, I could envision what my fingers had to do, but making them do it was a whole ‘nother matter. My grandfather—not the most patient person—exhibited enough restraint to spare me bruises and bumps when at first I was unable to make my fingers obey. Then, suddenly (or so it seemed to me), I sat on the floor by Pop’s chair and flawlessly did the job from beginning to end. Pop reached down and, with a gentle tug, untied them. Then I tied them again!

I ran to the stove, where my grandmother was fixing breakfast, plopped down on the floor, and demonstrated my new skill for her approval. As I recall, she grunted something neutral and then, her attention still on her cooking, said: “Where in the world did I put the lard can?” Later, when she sat the plate in front of me, I wolfed down the eggs and toast and jelly, gulped a large glass of milk, and bolted out the 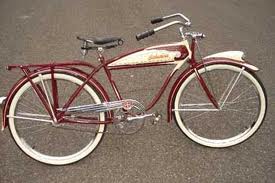 door, on the way to my cousin Raymond’s house to show him my new trick. I had eaten so fast that as I ran up the street I burped and snorted at the same time, and had to return to the yard and wash off the front of my shirt at the water pump. In those days (1943-44), I was living with my father’s parents in Glen Burnie, Maryland. We did not have running water. Instead, there were two water pumps and an outhouse. One pump was under the grape arbor behind the house, and the other was upstairs in the “Summer Kitchen.” I used the one under the grape arbor.

Cousin Raymond was four years older than me and had an electric train; he had an air rifle; he could ride a two-wheel bike—God, I envied him! He was so cool. Raymond rode his bike like a pro. He would pedal his Schwinn full-tilt into my yard and throw it down into a sliding stop that would scatter dirt and gravel all over. He also had a real wristwatch with numbers that glowed in the dark. As I said earlier: I was about five then—maybe six. Raymond would have been nine or ten.

On that day, I ran up the back steps at Raymond’s and pushed through the door and into the kitchen where Raymond and my uncle and aunt were having breakfast. I blurted out the news of my recently acquired skill. Raymond was unimpressed. Aunt Sadie told me I did a good job and Uncle Pete gave me a fifty-cent piece. When Raymond was finished eating we went outside and into the wooded lot behind the house where he had his “fort.” Raymond wanted to know if I thought I could learn to ride his bike. Could I? Full of shoelace-tying confidence, I said, “Go get it and I’ll show you!” Raymond wheeled his bike out of the garage and told me that my lesson would cost twenty-five cents. Being fifty-cents flush, I didn’t hesitate—I gave Raymond the half-dollar. He promised to make change later.

Raymond held the bike steady while I got on it. I settled myself on the “saddle” and grasped the handlebars with a death grip. Raymond told me that when he pushed I was to start pedaling. We started down the driveway, Raymond running as he pushed the bike. He yelled: “Pedal! Pedal!” I tried—but I was on a 26” bike with legs that were not yet long enough. So, I had to stand up to pedal.

Then pedal I did—frantically. Raymond let go of the bike and I zipped completely across Fourth Avenue, a busy Glen Burnie street. Cousin Raymond was now yelling: “Steer it! Steer it! Pedal! Pedal! Watch out for the curb!” Too late—I bounced over the curb, ran up a slight grassy incline and into Mrs. Sauers’ flower bed, then tilted over in what seemed like slow motion and nose-dived into the lower branches of a fir tree. At that moment Mrs. Sauers chose to come around the corner of the house. She was pretty calm about the flowerbed and seemed more concerned over the scrapes I picked up when I dove into her tree.

Once Raymond and I retrieved the undamaged bike, I was ready for another lesson. He said it would cost me another quarter, so I told him to keep the change from the fifty-cent piece. This time, Raymond decided it would be better if I rode the bike down the street towards our grandfather’s house. Before I know it I’m back on the bike. Raymond pushes me off to a rolling start. I pedal like a madman. The bike begins to fly down the street. I’m going too fast to turn into the yard! Raymond’s yelling: “Hit the brakes! Hit the brakes! Steer! Steer! Hit the brakes!” Unfortunately, Raymond had neglected to tell me where the brakes were or how they worked. The bike picked up speed and began to wobble out of control as I bounced over another curb. Raymond was further behind me now, but I managed to turn a blind corner, only to run into the back of my Uncle Joe’s 1934 Plymouth. No contest. The Plymouth won.

There must have been a lot of hollering. Raymond now yelling: “My bike! My Bike! Look what you did to my bike!” Me screaming in pain as I slid off the hood (Yeah, I went completely over the car)

and into the loose gravel that covered the driveway. My Uncle Joe yelled something I couldn’t make out as he ran away from the Plymouth, which he had been washing when I dropped in—unannounced.

After he realized what he thought had happened, Uncle Joe carried me into the house and laid me on the old mohair sofa. Grandma brought a pan of warm water and some clean cloths. She cleaned my cuts and abrasions. Pop came in and demanded to know what was going on. Raymond was still hollering about his bike. Uncle Joe explained that I must have fallen out of a tree.

Grandma tried to shush us all and shoo us out. And, even though I hurt in places that I didn’t even know I had, I was smiling. In the space of only an hour or two I had learned to tie my shoes; ruined a flower bed; nearly destroyed a bike; dented the hood of my Uncle’s car—and lived to tell about it; had been gifted fifty-cents and had spent it on bike-riding lessons. (How well I rode the Schwinn doesn’t matter—I did ride it.) I figure it was worth every penny.

and door service technician. He has been writing physical security related articles since 1991. Seventeen years ago, Jake wrote his first article for the National Locksmith Magazine and has been their technical editor for fifteen years. Pure Jake Learning Seminars©, his nationally conducted classes, are designed for locksmiths and professional door and hardware installers. For more information, click the “Pure Jake” link in the sidebar blogroll and under the “business” label. (The photo at right is Jake at age 12 or thereabouts. To access all of Jake’s adventures as a Baltimore boy growing up back in the 1940s and 1950s, type his name in the sidebar search window and press the button.)

This entry was posted on Wednesday, September 1st, 2010 at 7:39 am and is filed under essays, kids, non-fiction, relationships, writing. You can follow any responses to this entry through the RSS 2.0 feed. You can leave a response, or trackback from your own site.