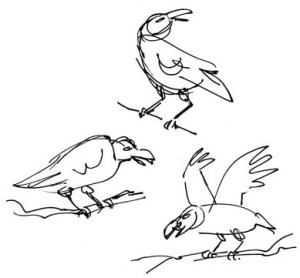 Dinner is over. I’ve washed the dishes and read the paper and watched the news on television. Now I’m sitting on my balcony looking straight out at lush treetops. It’s dusk, and a cawing crow alights on a branch in front of me. Its cries are a mighty effort even for such a large bird, and its wings recoil with each shout-out. Soon, a second crow as big as the first one lands on a wire very near the first, then a third settles on a telephone pole several yards away. The first two are mates. I know all three, having watched them now for many sun-downs. They look identical, but I recognize their interactive behavior. For a beat or two the second crow eyes the antics of the original screamer, then takes up the cawing game. Quickly, the third crow follows suit. The first time I saw this crew I remember wondering what the bond between them amounted to. Are the two merely a couple? Is the single one an offspring, returned to live — so to speak — at home? Is the furious caterwauling some sort of family argument? Or perhaps a jealous complication created by a complex domestic arrangement? Interesting, I think, how my lonely thoughts create personifications.

Minutes pass. The sun is well below the horizon and my crows have disappeared from view. I suppose they’ve gone to their nests or caves or whatever for the night. The sky continues its slow darkening. The last trace of orange streaks the western horizon. One by one all sound abandons the evening, every distant warble. For twenty minutes or more there is no movement or noise near my balcony — just early evening stillness.

For a long time I’m in a dreamy trance, then I notice a rapid movement at the edge of my vision. Wings are once again propelling in the cool night. Another “friend” of mine, a bat, has emerged to feed on night bugs. It flies directly at me, then veers into a steep diagonal climb, then swoops down and darts sharply in the opposite direction. I watch its stunting display and wonder: Does it have a mate? Is that sharp ticking noise a coded message, or simply sonar? Before I have time to think again my tiny messenger is lost in the black sky.

This entry was posted on Wednesday, April 20th, 2011 at 7:59 am and is filed under animals, bats, doodles, essays, non-fiction, relationships. You can follow any responses to this entry through the RSS 2.0 feed. You can leave a response, or trackback from your own site.