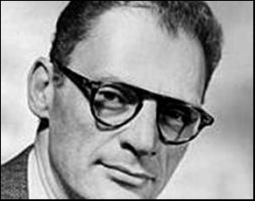 (B)efore I wrote my first successful play, I wrote . . . fourteen or fifteen other full-length plays and maybe thirty radio plays. The majority of them were nonrealistic plays. They were metaphorical plays, or symbolic plays; some of them were in verse, or in one case — writing about Montezuma — I turned out a grand historical tragedy, partly in verse, rather Elizabethan in form. Then I began to be known really by virtue of the single play I had ever tried to do in completely realistic Ibsen-like form, which was All My Sons. The fortunes of a writer! The others, like Salesman, which are a compound of expressionism and realism, or even A View from the Bridge, which is realism of a sort (though it’s broken up severely), are more typical of the bulk of the work I’ve done. After the Fall is really down the middle, it’s more like most of the work I’ve done than any other play — excepting that what has surfaced has been more realistic than in the others. It’s really an impressionistic kind of a work. I was trying to create a total by throwing many small pieces at the spectator.

I saw one production (of After the Fall) which I thought was quite marvelous. That was the one Zeffirelli did in Italy. He understood that this was a play which reflected the world as one man saw it. Through the play the mounting awareness of this man was the issue, and as it approached agony the audience was to be enlarged in its consciousness of what was happening. The other productions that I’ve seen have all been really realistic in the worst sense. That is to say, they simply played the scenes without any attempt to allow the main character to develop this widened awareness. He has different reactions on page ten than he does on page one, but it takes an actor with a certain amount of brains to see that evolution. It isn’t enough to feel them. And as a director, Zeffirelli had an absolutely organic viewpoint toward it. The play is about someone desperately striving to obtain a viewpoint.

(F)or years theatrical criticism was carried on mainly by reporters. Reporters who, by and large, had no references in the aesthetic theories of the drama, except in the most rudimentary way. And off in a corner, somewhere, the professors, with no relation whatsoever to the newspaper critics, were regarding the drama from a so-called academic viewpoint — with its relentless standards of tragedy, and so forth. What the reporters had very often was a simple, primitive love of a good show. And if nothing else, you could tell whether that level of mind was genuinely interested or not . . . . They knew how to laugh, cry, at least a native kind of reaction, stamp their feet — they loved the theater. Since then, the reporter-critics have been largely displaced by academic critics or graduates of that school. Quite frankly, two-thirds of the time I don’t know what they really feel about the play. They seem to feel that the theater is an intrusion on literature . . . . I don’t think we can really do away with joy: the joy of being distracted altogether in the service of some aesthetic. That seems to be the general drift, but it won’t work: sooner or later the theater outwits everybody. Someone comes in who just loves to write, or to act, and who’ll sweep the audience, and the critics, with him.

This is one in a series that will post on Wednesdays. If you’d like to read more of what people such as Arthur Miller, Sam Shepard, Joyce Carol Oates and other famous — and not so famous — playwrights have to say about the art and craft of writing for the stage, type “On Playwriting” into the small sidebar window and tap the “Search” button. (Arthur Miller On Playwriting part XI will post next Wednesday.)