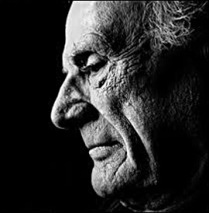 (Senator) McCarthy (was) actually saying certain lines that I recall the witch-hunters saying in Salem. So I started to go back, not with the idea of writing a play (The Crucible), but to refresh my own mind because it was getting eerie. For example, (McCarthy)  holding up his hand with cards in it, saying, “I have in my hand the names of so-and-so.” Well, this was a standard tactic of seventeenth-century prosecutors confronting a witness who was reluctant or confused, or an audience in a church which was not quite convinced that this particular individual might be guilty . . . . He had nothing at all—he simply wanted to secure in the town’s mind the idea that he saw everything, that everyone was transparent to him. It was a way of inflicting guilt on everybody, and many people responded genuinely out of guilt; some would come and tell him some fantasy, or something that they had done or thought that was evil in their minds. I had in my play, for example, the old man who comes and reports that when his wife reads certain books, he can’t pray. He figures that the prosecutors would know the reason, that they can see through what to him was an opaque glass. Of course he ends up in a disaster because they prosecuted his wife. Many times completely naive testimony resulted in somebody being hanged.

I never used to, but I think now that, while I hadn’t taken over an ideology, I did absorb a certain viewpoint. That there is tragedy in the world but that the world must continue: one is a condition for the other. Jews can’t afford to revel too much in the tragic because it might overwhelm them. Consequently, in most Jewish writing there’s always the caution, “Don’t push it too far toward the abyss, because you’re liable to fall in.” I think it’s part of that psychology and it’s part of me, too. I have, so to speak, a psychic investment in the continuity of life. I couldn’t ever write a totally nihilistic work.

I do have about five things started—short stories, a screenplay, et cetera. I’m in the process of collecting my short stories. But I tell myself, What am I doing. I should be doing a play. I have a calendar in my head. You see, the theater season starts in September, and I have always written plays in the summertime. Almost always—I did write View from the Bridge in the winter. So, quite frankly, I can’t say. I have some interesting beginnings, but I can’t see the end of any of them. It’s usually that way: I plan something for weeks or months and suddenly begin writing dialogue which begins in relation to what I had planned and veers off into something I hadn’t even thought about. I’m drawing down the lightning, I suppose. Somewhere in the blood you have a play, and you wait until it passes behind the eyes.

This is the last post in the Arthur Miller series. If you’d like to read more of what people such as Arthur Miller, Sam Shepard, Joyce Carol Oates and other famous — and not so famous — playwrights have to say about the art and craft of writing for the stage, type “On Playwriting” into the small sidebar window and tap the “Search” button.

This entry was posted on Wednesday, March 28th, 2012 at 7:15 am and is filed under acting, actors, fiction, playwriting, quotes, relationships, theater, writing. You can follow any responses to this entry through the RSS 2.0 feed. You can leave a response, or trackback from your own site.