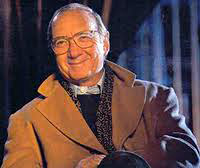 As many plays as I’ve written—twenty-seven, twenty-eight—I can’t recollect a moment when I’ve said, This would make a good play. I never sit down and write bits and pieces of dialogue. What I might do is make a few notes on who’s in the play, the characters I want, where it takes place, and the general idea of it. I don’t make any outlines at all. I just like to plunge in. I’ll start right from page one because I want to hear how the people speak. Are they interesting enough for me? Have I captured them? It goes piece by piece, brick by brick. I don’t know that I have a play until I’ve reached thirty, thirty-five pages.

I think about thematic plays but I don’t believe I write them. Nothing really takes shape until I become specific about the character and the dilemma he’s in. Dilemma is the key word. It is always a dilemma, not a situation. To tell the truth, I really don’t know what the theme of the play is until I’ve written it and the critics tell me.

In Broadway Bound I wanted to show the anatomy of writing comedy—with the older brother teaching Eugene, which was the case with my brother Danny and me. Stan keeps asking Eugene for the essential ingredient in comedy and when Eugene can’t answer, Stan says, “Conflict!” When he asks for the other key ingredient, and Eugene can only come up with, “More conflict?” Stan says, “The key word is wants. In every comedy, even drama, somebody has to want something and want it bad. When somebody tries to stop him—that’s conflict.” By the time you know the conflicts, the play is already written in your mind. All you have to do is put the words down. You don’t have to outline the play, it outlines itself. You go by sequential activity. One thing follows the other. But it all starts with that first seed, conflict. As Stan says, it’s got to be a very, very strong conflict, not one that allows the characters to say, Forget about this! I’m walking out. They’ve got to stay there and fight it out to the end.

I’ve got infinitely more plays in the drawer than have seen the lights of the stage. Most of them never come out of the drawer, but occasionally one will and it amazes me how long it has taken to germinate and blossom. The best example would be Brighton Beach Memoirs. I wrote the first thirty-five pages of the play and gave it to my children, Nancy and Ellen, and Marsha, my wife at the time. They read it and said, This is incredible. You’ve got to go on with it. I showed it to my producer, Manny Azenberg and to Gordon Davidson, and they said, This is going to be a great play. I knew the play was a turn in style for me, probing more deeply into myself, but maybe the pressure of the words great play scared me, so I put it away. Periodically, I would take it out and read it and I wouldn’t know how to do it. After nine years I took it out one day, read the thirty-five pages, picked up my pen and the pad I write on and finished the play in six weeks. I have the feeling that in the back of your mind there’s a little writer who writes while you’re doing other things, because I had no trouble at that point. Obviously, what had happened in the ensuing years in my life made clear to me what it should be about. Somewhere in the back of my head I grew up, I matured. I was ready to write that play.

Sometimes it helps to have some encouragement. Once I was having dinner with Mike Nichols and he asked, What are you doing? I said, I’m working on a play about two ex-vaudevillians who haven’t worked together or seen each other in eleven years and they get together to do an Ed Sullivan Show. He said, That sounds wonderful. Go back and finish it. So I did. It was as though a critic had already seen the play and said, I love it.

Part II of this Neil Simon series will post next Wednesday.