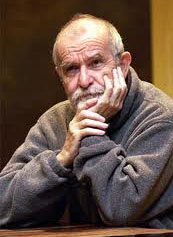 Port Elizabeth and its immediate surroundings, is a region that I know like the back of the hand that holds my pen as I write about it. I can stand on a street corner in Port Elizabeth, look at anybody and put together some sort of biography. I know where they come from, where they’re going. I have a feel of the textures of their life. If I stand on a street corner in New Haven, which is a place I’ve gotten to know as well as any place outside of South Africa, I am . . . at a total loss to identify the people passing me on that street.

I would like to believe that if for some reason the situation deteriorated to the point where I was told, “If you leave South Africa, you can never come back,” I’d stay there. There were periods in my life when I could have been seduced away. I am incredibly fortunate that the government took away my passport at the point when I was most open to seduction.

(I)n the late sixties a liberal was a dangerous animal. Liberals aren’t dangerous animals anymore, so they don’t hassle me too much . . . .  I know my telephone is tapped—but I have a passport, a perfectly normal passport. The likes of myself aren’t seen as a threat to the establishment anymore. Now they have to deal with men and women who make bombs and set them off . . . . Their attitude toward me depends on how they feel when they wake up in the morning. Nadine Gordimer, J. M. Coetzee, Andre Brink are as baffled by how and why the government does things as I am. There just doesn’t seem to be any logic to it.

I have never had trouble publishing my work in South Africa. Although there’ve been a couple of occasions when school authorities threw my books out of their libraries.

Nobody can take what I love away from me. I would like to believe that love is the only energy I’ve ever used as a writer. I’ve never written out of anger, although anger has informed love. When I return, that love will still be there, even if the South Africa I go back to in five months’ time is radically different from the one I left. I would like to believe that my absence from South Africa won’t affect my relationship to that country, which has been the source of my inspiration, the soul of my writing.

How one human being deals with another remains the most critical fact in history. You can kill a man, or you can bless him. We all know about our potential to kill; we have dangerously lost sight of the fact that each of us can also bless.

Part III of the Athol Fugard series will post next Wednesday.