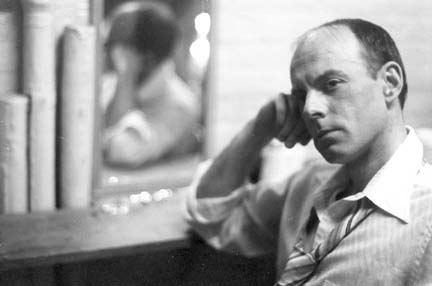 An actor waiting backstage can appear to be a lonely person, at least this one did to me. Was he feeling sad, I wondered, or just focused on trying to remember his lines?

On February 20, 1982, when I made the image, I was backstage at a community theater pretending to be an actor myself, but I was too busy to be lonely or bored. I had only one line in the play, which came late in the last act, so there was plenty of time to concentrate on what I was really there for — to learn all I could about how a play is staged.  I was doing research for a play I eventually wrote called “Local Talent,” for the Baltimore Playwrights Festival. My play was about a community theater group staging a production in a summer play-writing festival. At the time, I thought that conceit was a clever creative roundabout — and I was taking pictures as well as notes.

The low light backstage required a wide aperture setting, which accounts for the shallow depth of field. Note that the face of the actor is sharp, while his right hand and arm are in softer focus. And the even softer secondary “portrait” — the moody reflection in the mirror — has a “painterly” quality I find very appealing. I was also attracted to the visual contrast of the three vertical capped pipes at the left edge of the frame, and I was careful to include them in the composition.

This entry was posted on Wednesday, January 9th, 2013 at 7:32 am and is filed under acting, actors, drama, photography, theater. You can follow any responses to this entry through the RSS 2.0 feed. You can leave a response, or trackback from your own site.