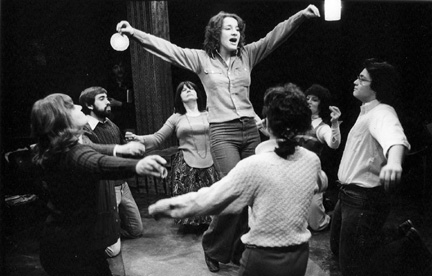 Many people attracted to community theater—as actors or to work backstage—are involved for only a limited time, anything from the run of one production to a few years. Volunteering to work on a play, in whatever capacity, involves hours, days and weeks of hard creative work. It’s a huge commitment, especially if you have a day-job or a family (or both), and after awhile some folks—even those who love the experience and would like to continue—feel they have to drop out. On the other hand, there’s the long-term involvement of people like Sharon Weaver. (She’s pictured above rehearsing her solo in the Baltimore Spotlighter’s Theater 1977 musical production of Zorba The Greek.) After more than thirty years, Sharon is still at it. These days, though, she’s usually running the show. At a recent gathering of local theater people, Sharon and I had a chat about the Harold Pinter play “Old Times,” which she is directing for the Vagabond Players’ 93rd season. The theater bills itself as “America’s Oldest Continuous Little Theatre,” and Sharon has been active with it, or with other local stages, a full third of that time. Now that’s a commitment to community theater.

Editor’s update. The Zorba production was in 1977, the Pinter play Sharon directed opened in 2009, and she’s directed many more since. Now here we are in 2013. At another recent gathering—this time to read a draft of my one-act play about a young boy–Sharon volunteered to take the part of the mother. Her commitment continues.