My Sunday “Lonely Guy” activity is to read the New York Times and watch C-Span 2 Book TV, muted. If I glance something interesting on the screen — Christopher Hitchens, say, ranting about why we should be in Iraq — I may bring up the sound. That seldom happens. Most Sundays, only the rustle of newsprint is heard in my living room. Sometimes, though, the thing on TV that catches my eye is the shape of a nose, or a hairstyle, or an odd mouth and I feel a powerful urge to draw it — and the rest of the head. So I open my sketchbook, select a soft pencil from the coffee mug on the table by my chair, and set out to prove once again that I’m not only the world’s worst caricaturist, but should also get a medal for being the slowest. Of course, the nice thing about sketching talking heads on TV is they hold still for long periods, which means I can take all the time I need to get it wrong. 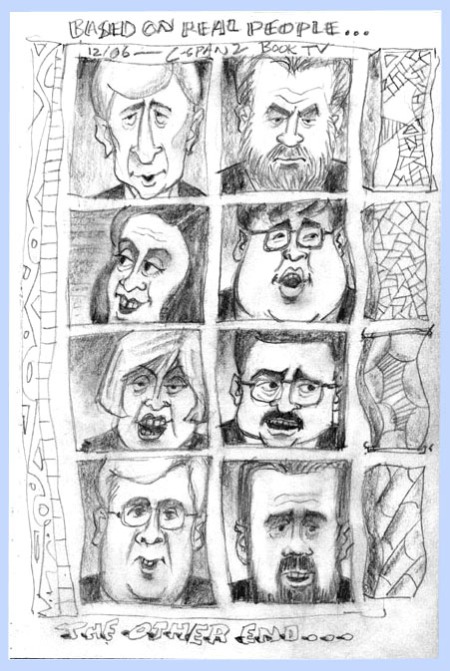 I have no idea why I doodled all that stuff on the sides, or wrote “The Other End” at the bottom, but I do enjoy making those little “drop” shadows under the letters. The thing that drives me mad, though, is that I have no memory of who most of the people are. (Memo to self: Keep better sketchbook notes). All I know for sure is that these folks appeared on C-Span 2 sometime in December, 2006. Also, I’m pretty sure the guy on the top left is a well-known newsman, one of the Kalb brothers, but which one? And the blond woman near the bottom of the left column is an expert on world religions. Interesting face, and I loved the informed talk she gave (I have the sound up while I sketch). Of course, all this assumes that I managed a passing likeness of at least those two.

This entry was posted on Wednesday, February 27th, 2013 at 7:18 am and is filed under caricature, cartooning, doodles, illustration, images, journalism, war. You can follow any responses to this entry through the RSS 2.0 feed. You can leave a response, or trackback from your own site.