Zen photography thought for the day: Inside the vertical there may be a better horizontal. When it comes to photographic composition, I prefer the “arty” method — that is, I carefully arrange the image in the view finder of the camera before the shutter is tripped, then exhibit the result full-frame. But I’m no stickler. I know that sometimes a well planned composition is simply not possible, and a crop or two may save the day.

My idea of a good photograph is one that elicits an emotion in the viewer, either positive or negative. The crop above was selected with the idea of pure “joy” in mind; and to intensify that feeling I “zoomed” in on the original (see below) to eliminate unnecessary details and emphasize the dynamic lateral movement

of the woman’s head out of the top left side of the frame. Whenever possible I like to have important elements “bleed” off the edges, which adds to the drama.The extreme crop keeps the eye of the viewer where it needs to be, focused on the expressions of both the young lady and the cat; it prevents the eye from wandering up or down, right or left, forces it to remain close on the interesting blur of the woman’s head and the sharper head and body of the animal.

The original image was one of those “just shoot and hope for the best” deals that happen so fast you’re happy if you get anything at all. With animals and kids you can forget about careful composition or re-staging an action, so the crop becomes a useful salvage tool. This image makes me smile each time I see it — and the way I decided to crop it, I think, enhances the playful feeling. The idea is simple: Make it easier for the viewer to share the joy that I felt the first time I saw the image come to life in the developing fluid.

Thanks to Jo-Ann Pilardi for this cartoon idea. 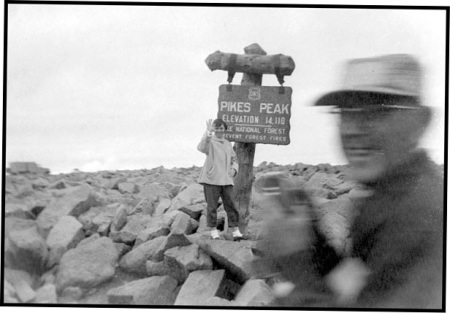 Climbing Pike’s Peak wasn’t challenge enough for my U. S. Army 77th Special Forces Group. The gung-oh outfit — aka The “Green Berets” — designed a training exercise that involved climbing the 14,000 foot tourist mountain in Colorado, and they decided it would be a good idea to begin by climbing two other 13,000 foot peaks on the way. (Click the image above for a larger view.)

The exercise was part of a Summer Military Mountaineering course at Fort Carson, near Colorado Springs. The slog took three days, and we spent two nights in sleeping bags, no tents.

But the weather was fine, sun during the days and cool nights, so the sleeping bags were not the problem. The problem for me — a picky eater in those days— was that we “dined” only on military “C-rations.” As anyone who served in the army back then will tell you, C-rations consisted of tasteless canned meat, stale crackers, and weak Sterno-heated coffee. In the snapshot, my tepid brew is being sipped from a can recently emptied of its sliced peaches for breakfast.

On the first night out, my buddy Pluchek and I slept under an arrangement of huge boulders, so situated as to create a small cave-like shelter. The idea of nesting there was to avoid the heavy dew that settles in the mountains each morning. Our plan didn’t work. Abundant moisture collected on the tops of the boulders and ran in rivulets to the underside, where it dripped onto us. The next morning, we crawled from under the rocks like human slugs and dosed ourselves with some of that wonderfully bad coffee.

Afterwards, during the “hurry-up-and-wait” military routine before the order to move out came, Pluchek used his rucksack for a pillow and napped on a warm rock like a lizard.

We made our target summit the next afternoon after a third long hike in as many days. We didn’t have to actually “climb” the mountain. To me, mountain “climbing” means a hand over hand struggle using ropes and pitons and such. (Rock climbing was another of our Summer Military Mountaineering courses, but I’ll save that for another blog post.) Since we were already at altitude, we simply walked up the rest of the way to Pikes Peak, strolled to the 14,110 foot summit as you would on any other hike. To be honest, the experience was rather anti-climatic — pun intended. We were greeted by tourists who had opted to take the scenic cog railway. After a cigarette break and extra time to enjoy the view, we loaded onto two trucks for the ride back to Fort Carson. 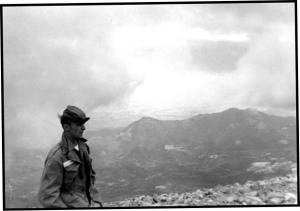 In the shot of Pluchek at the summit, you can just barely make out Colorado Springs in the distance through the morning mist.

As we moved to the trucks, I spotted a cute girl posing for a snapshot by the Pike’s Peak summit sign, and assumed the older man taking the picture was her father. She was a typical 1950s bobby-soxer, bobbed hair, tan “car coat,” rolled up blue jeans to show off her white anklets, and what appeared to be classic penny loafers on her feet. The man noticed me and turned just as I was about to snap a final frame with my box camera. I love the blur that resulted from the smiling man’s movement — it creates a dynamic foreground element that serves to frame the girl and the sign — an example of what I’ve come to think of as photographic serendipity. Dumb luck, in other words.

When we returned to Fort Carson and were told about our class for the following day, it turned out to be another activity that raised questions in my naturally non-military mind. As we were briefed, my thoughts went something like this: Unless we are going to be prospecting for gold or silver in the Rocky Mountains, why in the world do we need to learn how to pack mules?

Doodlemeister is looking for short memory pieces up to a thousand words, on any subject, in any style — as long as it happened to you. Whatever the subject, we have a bias for the lighthearted tone. And we’ll help you to edit and/or cut your piece. If you’d like to submit a story, please contact us at jimscartoons@aol.com

The “Hip Shots” series of photographs will feature images that were grabbed “on the fly,” with little or no regard for framing and focus. The object of the exercise is to create dynamic pictures, not perfect ones. With this ” shoot-from-the-hip” method, the more frames exposed, the better the chances are that you’ll come up with something interesting — a related series that may be arranged as a post. If you’d like additional tips for using the technique, or to submit your own images, drop a question or note in the “Leave a Comment” section, below. This feature will appear most Fridays.