The Genius of Paul Rhymer, I

I wrote The following essay about Paul Rhymer’s classic radio program “Vic and Sade” on April 20, 1995, to promote a talk I gave at the University of Baltimore. The program featured actors reading from Vic and Sade scripts. If you want to know more about the work of Paul Rhymer, or listen to one of the taped shows, click on the “Paul Rhymer” and “Vic and Sade” links in the sidebar. (For a start I recommend the show “A Letter From Aunt Bess.”) 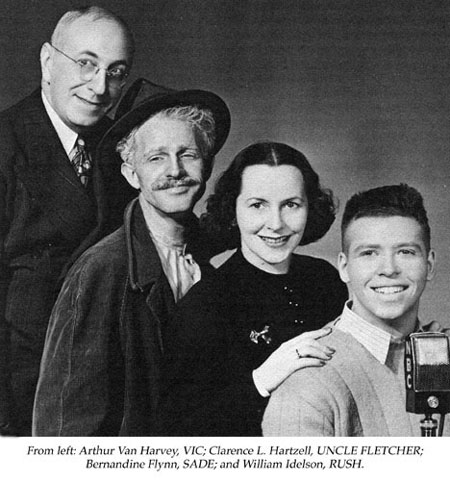 Paul Rhymer’s knack for writing dialogue is nowhere more evident than when a character delivers a telephone monologue. Sometimes it’s Vic on the phone curtly dealing with a salesperson or a wrong number, or Rush gabbing with Bluetooth Johnson, Nicer Scott, or another of his buddies from the neighborhood. Most often, though, the telephone monologue falls to Sade when she’s home alone taking a break from her domestic duties. The monologue I’ve chosen as representative is from an undated script, most likely from the early 1940s, since Sade’s amiable Uncle Fletcher is featured. Uncle Fletcher joined the show as an on-mike character around that time, and here makes one of his slapstick entrances. When he enters, in the company of Rush, Sade’s telephone monologue, or “solo,” is transformed into a trio. Actually it’s a quartet if you count “Ruthie,” on the other end of the telephone line.

ANNOUNCER: Well, sir, it’s early afternoon as we enter the small house half-way up in the next block now, and here in the living room we find Mr. Victor Gook all by herself. Mrs. Gook is at the telephone conversing with her close friend and confidante Mrs. Frederick Stembottom. Listen:

SADE (to phone): I didn’t take you away from anything, did I, lady? Well, ish, I haven’t really got anything to say now that I’ve called you. (giggles) Yes . . . well, what happened I went like a house a-fire all morning long and done nine million jobs around the house and then got dinner and pitched in on my upstairs the minute the boys left for the office an’ school, and finally did quit and wash and put on a clean apron and then discovered I’d been on the go so much I couldn’t settle down. (laughs) You know how that is lady. Person gets theirself all keyed up and they hafta slow down gradual or the boiler explodes. (laughs) Yes . . . so I telephoned you. Hey, maybe that’s not very complimentary. (loud lady laugh) No, but you appreciate how I mean, Ruthie. Sure. Yes, isn’t it a quiet afternoon. One of them hushedy-hushedy afternoons where a person sits and listens to pins dropping. Little bit ago I was out on the back porch shaking my mop and ‘way off in the distance somewhere I heard some fella say giddap to his horse and I bet twenty-five cents he was clear away over on Chestnut Street and that’s eight hundred miles from here if it’s an inch. Yeah . . . you run inta real still afternoons every so often. Like Sunday kinda. I was sayin’ to . . . say, lady, hang on a second, I think I heard my kitchen door. (calls) Hello? Groceries? You, Irving?

SADE (calls, in some surprise): Well—hello. (to phone) Uncle Fletcher and Rush just walked in, Ruthie. I can’t imagine what Rush’s doing home from school. (crash in the kitchen) Oh, my goodness. (calls) What happened?

FLETCHER (cheerfully, off) Fell down.

SADE (calls sharply) Who fell down?

RUSH (off, cheerfully): We both fell down.

SADE (not loud): Oh, for mercy’s sake. (to phone) What, Ruthie? No, we don’t need to hang up. There’s no reason why we hafta cut our conversation short just because . . . huh?

SADE (to phone): Well whatever you say, lady. Seems like a shame though. I take you away from whatever you’re doing and just because my family busts in we hafta cut short our . . . (giggles) . . . well, ish.

FLETCHER (coming up): Using the telephone, are you, Sadie?

SADE (to phone) No, you needn’t bother to call back, Ruthie.

FLETCHER (sententiously) When the older folks is using the telephone it’s always best to let up on the titters, whimpers and guffaws.

SADE (to phone): Well, all righty, Ruthie, whatever you say. Dandy. Fine.

FLETCHER (to Rush, sententiously) There was a little boy in Detroit Michigan neglected to let up on his titters, whimpers and guffaws while Momma was using the telephone and he disappeared and all they ever found was one of his tiny patent leather booties, the tassel singed at the bottom.

SADE (to phone): All righty then, Ruthie lady, we’ll leave it like that. You bet. All righty, Ruthie. You betty, lady. Goodbye. (hangs up)

The Last Word
Even before Uncle Fletcher and Rush enter in this example, Sade’s monologue—through Rhymer’s word choices and emphasis, including pauses, giggles and laughs—becomes a dialogue. It really is a solo, of course, but written so skillfully that we can almost hear her duet with Ruthie on the other end of the line.

Rhymer, by his example—assuming we’re interested enough to pay attention—is teaching us how to write humorous dialogue even when what he presents appears, at first, to be a monologue. As with the example above, all his lessons are subtle. If we want what he has to teach us, we have to dig it out. After all, Rhymer’s purpose in “Vic and Sade” is not to conduct a writing craft class, he simply want’s to entertain us. But sometimes it does seem that he also intends to instruct us directly, as in the following excerpt from a 1939 script. As we join the Gook family this time, Sade is explaining to Vic that she has been asked by Mr. Gumpox, the garbage man, to circulate a petition in the neighborhood. Seems he’s unhappy with his rate of pay and will consider staying on the job only if Sade can get six hundred signatures, which he assumes will influence the city to give him a raise. (Click on image above to read the caption.)

SADE: Let’s see. I think I can remember most of that petition. “We, the undersigned, being in sane mind an’ sound body, do hereby command, request, an’ implore that Francis Gumpox be retained by the city. As homeowners with a passionate love for a beautiful town in which to live we feel that this community could never stand to lose the services of Francis Gumpox, who knows and loves garbage like no other man on earth.”

SADE: Wait a second, I left out a word. “Who knows and loves garbage disposal like no other man on earth.”

SADE (giggles): The other word sounds funny . . . “knows an’ loves garbage like no other man on earth.”

VIC (chuckles): It all sounds funny.

This entry was posted on Wednesday, May 1st, 2013 at 7:17 am and is filed under acting, actors, comedy, couples, essays, humor, marriage, playwriting, radio, relationships, theater, writing. You can follow any responses to this entry through the RSS 2.0 feed. You can leave a response, or trackback from your own site.