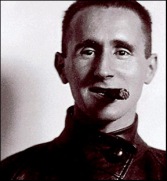 “The stage began to tell a story. The narrator was no longer missing, along with the fourth wall . . . the actors too refrained from going over wholly into their role, remaining detached from the character they were playing and clearly inviting criticism of him . . . The spectator was no longer in any way allowed to submit to an experience uncritically, by means of simple empathy with the characters in a play. The production took the subject matter and the incidents shown and put them through a process of alienation: the alienation that is necessary to all understanding.”

The Development of an Aesthetic

Edited and translated by John Willett, 1964

This entry was posted on Tuesday, August 26th, 2014 at 11:32 am and is filed under acting, actors, audience, characters, culture, drama, essays, non-fiction, philosophy, playwriting, poetry, post-modern, quotes, writing. You can follow any responses to this entry through the RSS 2.0 feed. You can leave a response, or trackback from your own site.