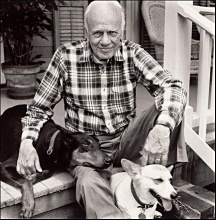 A Theory of Hurricanes

“People help each other in catastrophes. But they don’t feel good because they help each other. They help each other because they feel good. I knew a married couple once who were bored with life, disliked each other, hated their own lives, and were generally miserable—except during hurricanes. Then they sat in their house at Pass Christian, put a bottle of whiskey between them, felt a surge of happiness, were able to speak frankly and cheerfully to each other, laugh and joke, drink, even make love. After the hurricane they took a good hard look at each other on a sunny Monday morning and got a divorce.”

Walker Percy in his 1977 novel, Lancelot.

This entry was posted on Wednesday, September 16th, 2015 at 11:52 am and is filed under characters, conflict, couture, domestic conflict, family, love, marriage, men, novels, quotes, relationships, women, writing. You can follow any responses to this entry through the RSS 2.0 feed. You can leave a response, or trackback from your own site.