David Lean was known to say this about the film making process: “I love making motion pictures . . . I love getting behind a camera and trying to get images on the screen. I love cutting and editing. I love putting all the parts together at the end: The sounds, the music, the dialogue. Making a movie is the greatest excitement of my life . . . I love life and I don’t want to die. I want to go on making movies.”

I’m no filmmaker myself, but Mr. Lean’s words give me a sense of what it must feel like to be one. A good quotation can do that. Here are several more small gems of wisdom from famous filmmakers, beginning with that genius Ingmar Bergman, who tells us what he thinks film isn’t: “Film has nothing to do with literature; the character and form of the two art forms are usually in conflict. This probably has something to do with the receptive process of the mind. The written word is read and assimilated by a conscious act of the will in alliance with the intellect; little by little it affects the imagination and the emotions. The process is different with a motion picture. Putting aside will and intellect, we make way for it in our imagination. The sequence of pictures plays directly on our feelings.” 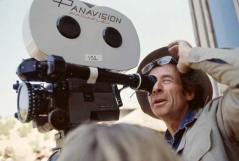 Meanwhile, movie director Robert Penn put’s his attraction to film this way: “In the theater, the reliance is on the verbal. Film is how one looks, as against what one says. On the stage, you can’t document that. You’re too far back. So what one says is what one is . . . You don’t have to say it in a film. A look, a simple look, will do it.”

Milos Forman, points out the difference, in terms of reality and unreality, between theater and film: “ . . . you know, in the theater you don’t pretend that what you see on the stage is reality. But in films. . . . automatically the photography enables you to pretend what you see on the screen is reality. So I am disturbed when in that reality I see theater.”

Bernardo Bertolucci seconds that: “My primary choice is one against the theater. I believe it is easier and better for me to shoot from reality, to take a position in the geography and environment of real space.”

Director and former standup comic, Elaine May, also compared film to life, and found life wanting: “Yes, there is truth in movies. No, movies are not like life. They are constructed in advance. They have a beginning that has probably been rewritten several times, a middle that has been cut and reshaped, and an end that often has music over it. Most movies . . . have a confrontation scene that provides some kind of insight that affects the characters or the audience, or both. In life we have hundreds of such scenes, scenes in which we say the worst thing we can say, in which each person tells what he thinks is the whole truth. Two hours later we have the same scene again. Nothing has really changed. You can’t get any insights. You usually just get mad. Movies or plays can sound natural, or seem real, or have truth, but they can never be like life. After all, they’re not supposed to run over two hours. “

For some, film offers a unique opportunity to explore the unconscious mind. “I think that the nature of movies is images that are more concerned with our desires than any other part of reality. The nature of movies is to connect with our unreal selves. Freud said that every unexplained dream is a letter from the unconscious which is not opened. Dreams can put us in touch with deep realities, and films are very good nightmares.” Dusan Makavejev, Yugoslav director, offered that pithy opinion in Ciné-tracts, the Spring, 1977 issue.

That master of cinema surrealism and automatism, Luis Buñuel, agrees: “The screen is the superior way of expressing the world of dreams . . . . The cinema seems to have been invented for the expression of the subconscious.” But he thinks films often fail to do this: “My aspiration as a film viewer is to have the movie uncover something for me and this happens rarely.” 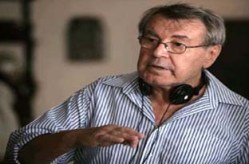 For another straightforward comment, I again call on Milos Forman (that’s him at right): “For me film is a pleasure, a desire to tell stories. Everybody likes to tell stories.”

Director Arthur Penn, says: “Film offers the opportunity for constant contradiction between what is said and what is done. It’s closer to how we really experience life. I’m saying that, but I’m really feeling this. And these two things are going on at once. Ambivalence is closer to the human feeling than the simple Eugene O’Neil statement: ‘My father was a bastard.’ That sort of statement that says everything and nothing. Well, film is the exquisite medium for expressing ambivalence. A man says one thing, but his eyes are saying another thing.”

The great film director and former cartoonist—and therefore, beginning with the walls of caves, one of the original image makers—Frederico Fellini, adds this: “Indeed, what is it to make a film? It is naturally, a question of trying to bring order to certain fantasies and of narrating them with a certain exactness.”

Up to this point, our film directors have been dealing, mostly, with abstraction. Now giving his view on the story—the creative “spine” of the film as some might call it—here is actor-director Dennis Hopper: “I believe that you start a movie very slow, very slowly drag people in up to a certain point. Then, just as they get a little restless, you start socking it to them. This makes me favor the episodic structure, like music—something that moves along with short breaks in it: you keep giving people something new, keep building pressure. The you cut off, relax,  go for a ride.”

Robert Bresson claims he drags people into his movies: “As Dostoevsky frequently does, I present the effect before the cause.

I think this is a good idea, because it increases the mystery; to witness events without knowing why they are occurring makes you want to find out the reason.”

And finally, directly addressing our original question, former standup comic (with Elaine May) and award-winning film director, Mike Nichols, defined film most simply and perhaps best: “Movies are mood . . . . The thing about something that’s made right—whether it’s a novel, or an opera, or a film—has to do with being hung on a spine . . . The more solid it is, maybe the truer it is.”

This entry was posted on Saturday, August 20th, 2016 at 7:42 pm and is filed under acting, actors, art, comedy, culture, drama, film, film noir, Hollywood, humor, pictures, quotes, writing. You can follow any responses to this entry through the RSS 2.0 feed. You can leave a response, or trackback from your own site.