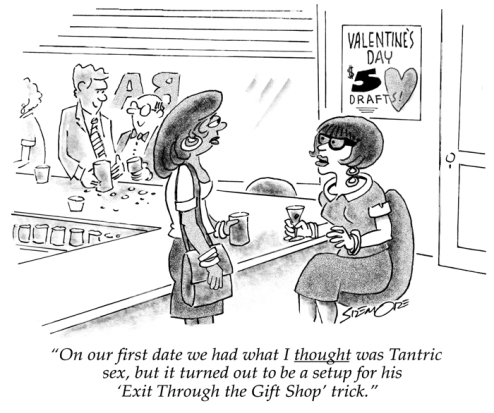 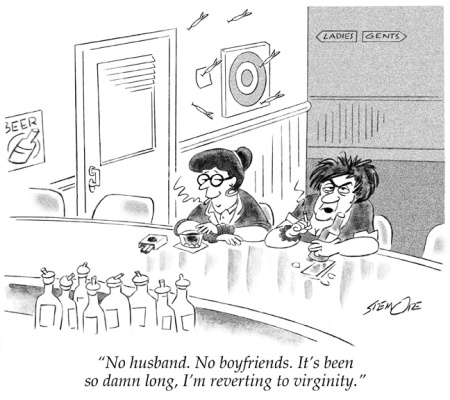 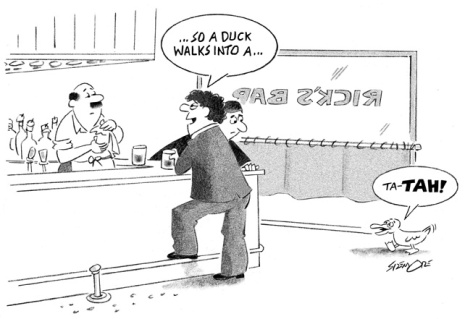 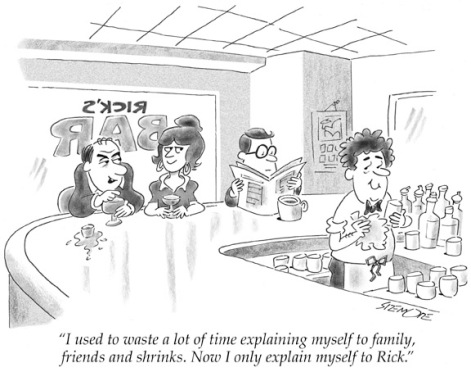 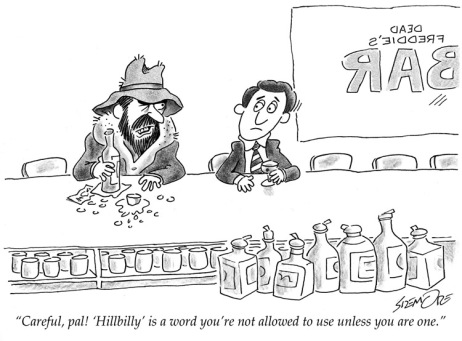 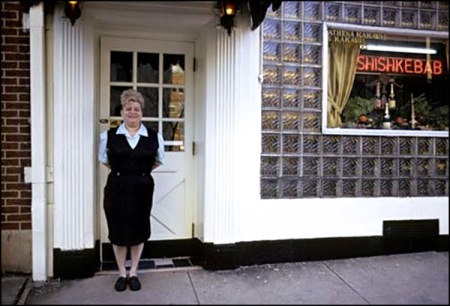 Annie was my favorite waitress. I never learned her last name, but once or twice every-other week during the decade or more that I dined at the Mt. Vernon—usually alone— she took very good care of me. Almost every time, I ordered a whole baked rock fish (aka: striped bass, head and tail removed), with mashed potatoes and gravy, and either a small house salad or green beans. Or, in season, perhaps I’d have corn on the cob. And to top it off, I’d have a sweet Rob Roy (scotch and vermouth garnished with a brilliant red maraschino cherry), served in a fancy cocktail glass. The Rob Roy made me feel sort of sophisticated. At the end of each meal, without fail, Annie would look at my plate, smile and shake her head. Then she’d say with mock horror, “You didn’t finish your potatoes!?”

I’m now at the age when I can’t always trust my memory, but because of the good times I spent there I have a pretty clear recall for the Mt. Vernon interior. In fact, I recently found a yellow-ish clipping in my files from the Baltimore Sun Magazine dated February 11, 1973, against which I can test my braincell retention. 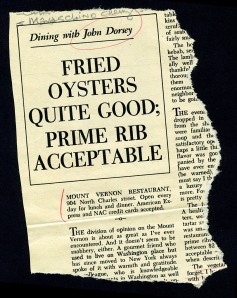 The Dining With John Dorsey column provides this description of the Mt. Vernon interior: “One long, high ceilinged room that probably hasn’t been changed since the Thirties, with a bar in front, booths down both sides and tables in the middle. Nobody sits at the tables unless the booths are full. The lighting is uncompromisingly bright, but at least not fluorescent. There is wooden paneling about half-way up the walls, and there is a mirror on the wall in each booth; I don’t know why. What this does, though, is give you odd perspectives. For instance, by looking in the mirror across the room and one booth up, you can see what the people two booths away on your side are eating—or if you’re a lip reader you can take in their conversation. I’ve always thought this presented good spy story possibilities.”

That’s how I remember the room, too, and I especially like Dorsey’s bit about the odd booth-to-booth visuals provided by the small mirrors, something I was taken with and pondered myself; I would only add that they were diamond-shaped. I never wrote a spy story, but did pen a bad boy-girl “breakup” short story, complete with Hemingway-esque dialogue, set in a restaurant much like the Mt. Vernon. I used John Dorsey’s descriptions to what I imagined was good effect. In my story, though, I also observed that there were coat hooks attached to each of the wooden booths; in cold weather the hooks were laden with thick winter coats, scarfs, and piled-on hats, giving the room an even more crowded and homey feel.

Here are a few John Dorsey quotes about the quality of the food at the non-fictional Mt. Vernon: “The house specialty is a lamb shish kebab, served with rice and Greek salad. The lamb is sometimes tough, but usually well marinated and one can be thankful that it isn’t beef; the rice is thoroughly forgettable . . . . The shrimp cocktail, accompanied by the hottest sauce I have ever encountered in a restaurant (be warned), were delectable. But I must say I think shrimp are getting to be a luxury few people can afford anymore. Four medium-large ones for $1.75 is pretty stiff . . . . the vegetables you might as well forget . . . . the string beans I will pass over, and you would be wise to do the same. The salads, though, are always fresh and crisp.”

Of course Mr. Dorsey ends with a description of dessert, one which happened to be my favorite: “We looked forward to our rice pudding . . . and were disappointed. It had little character and no raisins. The coffee was as always only pretty good, but they never seem to mind filling up your cup again. The bill for our dinner, with a drink apiece before, was something less than $13 before tip. Not really cheap, but not bad.”

And he finishes with a short, damning-with-faint-praise, editorial comment: “I like the Mount Vernon, but it’s hard to say just why. It’s even harder to recommend it. Let’s just say if you don’t mind it when the waitress calls you “dear” as long as she’s cheerful, you might give it a try.”

Ah, yes, I have fond memories of those prices! And the food, by my non-professional standards, was wonderful. But of course my fondest memories are of Annie. She was a warm, clever woman; a great talker, too—and I would now say sort of motherly. As for the comment about my uneaten mashed potatoes—always delivered as an exclamation and a question—that was her little running joke. Hearing her repeat it as if on cue each time I ate at the Mt. Vernon had a soothing effect; it made me feel—well—right at home. And which I now realize, or at least suspect, was Annie’s generous idea all the time.

Postscript: The pictures below depict exterior and interior views of Marie Louise Bistro, which is the current incarnation of 904 North Charles Street, in all its rehabbed glory. It’s a very nice place these days and I’ve eaten there with friends several times. But as good as the food is, as pretty as the setting is—and this should be no surprise after reading my short essay—it’s just not the same. 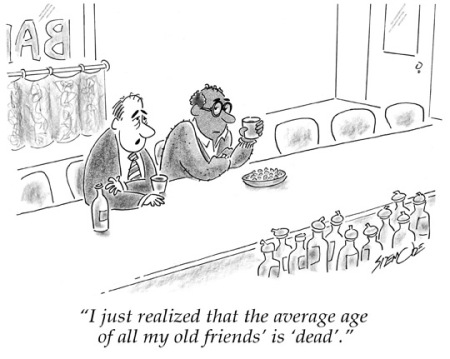 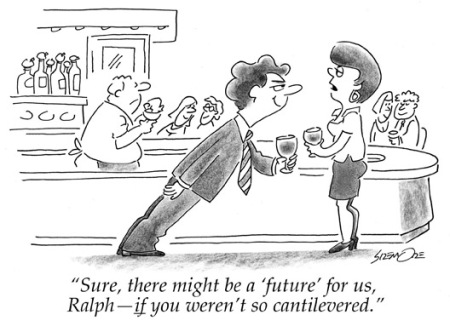 For several years, I’ve observed a homeless man in my neighborhood walking back and forth in front of my house each day, morning and afternoon. I live in the city, next door to a bar, and the sidewalk we share is just two red brick steps down from my front door. The homeless man has a flushed complexion and I suppose he could be a heavy drinker. But on the other hand, I’ve never seen him go into the bar next door, or into any of the many other bars along my street, which is a main drag with plenty of such places to quench a thirst.

The homeless man comes from somewhere west of my house—I have no idea from how far away—and he always walks to a shopping center, which is little more than a half-mile east. On the way back from the shopping center, he always carries two small paper bags, one with a cola beverage of some sort in a plastic bottle—I can see the screw-off cap peeking out from the bag. Since there are no bars in or near the shopping center, I have good reason to assume that the drink is non-alcoholic. The other bag, I surmise, holds his lunch, and perhaps even his dinner.

There have been long periods when I’ve seen the homeless man walking and holding his pants up with his left hand, appearing to have lost his belt. That condition usually goes on for a while—weeks, even months—and then he somehow comes into possession of another belt—or finds his old belt—because he no longer has to hold up his trousers. With both of his hands free again, he walks pretty much like you or me. That is, he walks like you or me except in the shopping center parking lot, where he avoids the sidewalk and claims the middle of a car lane. While strolling in the car lane, he does not look left or right, or behind him, or give way to the cars, so those of us who drive have to be careful to avoid hitting him.

One day about two years ago, the homeless man appeared on crutches, one leg in a cast that began below his knee and extended to, but did not cover, his toes. I don’t remember which leg it was, but what I do remember is that this was around the time that he and I began to make eye contact. After seeing each other up close a few times, we began to smile and nod at each other. That kept up a while, and before long we’d smile and nod and say “good morning” or “good afternoon,” just like regular people. But I noticed that when I carried my grocery bags to my car and we happened to pass each other in the car lane, we did not make eye contact or speak. I’m pretty sure that must have been his choice. If it had been up to me, we would have continued to smile and nod and speak. This is a very friendly neighborhood, and anyway, that’s just how I am.

For as long as the homeless man was on crutches, throughout the winter, he struggled to manage his little paper bags in all kinds of weather. After many months, he was finally off the crutches and walking with just the aid of a cane. This was in the spring, and around that time he also appeared to lose another belt, and throughout the summer I watched him wrestle with his cane and his bags in one hand, the other hand grasping the top of his pants. I don’t know what happened, or when it happened, but at some point I began to realize that things between us had changed dramatically. Now, no matter what the situation or location—or the weather, or the time of year—the homeless man and I no longer made eye contact or spoke.

So what happens on the day after Thanksgiving, comes as a big surprise. For the first time in months, I’ve decided to clean the very dirty plexiglass on my front storm door. This is a big deal because I hate to do windows of any kind. In fact, none of the glass in my house, except the front storm door, has been cleaned since I moved in some eleven years ago. So there I am standing on my little brick stoop, busy spraying and wiping down the storm door, and the homeless man comes by. He has long-since healed from his leg injury. And it seems to me that he makes a point to not look at me. But I won’t let this opportunity go by, and say, “Good morning, sir. How are you doing?” Without a beat, and without smiling or looking up, he replies, “Who can say?” and he continues on his way. 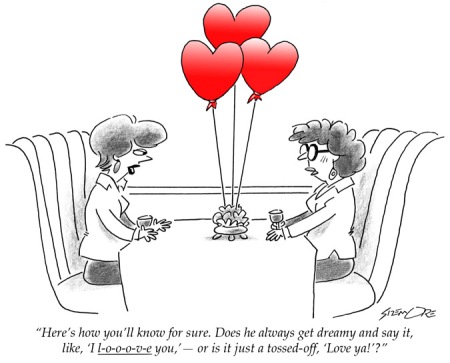