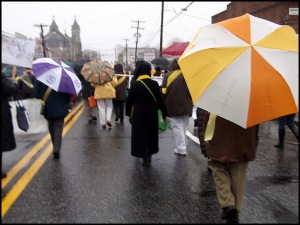 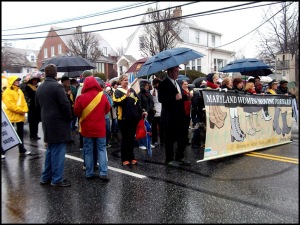 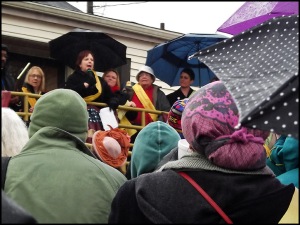 The “Hip Shots” series of photographs will feature images that were grabbed “on the fly,” with little or no regard for framing and focus. The object of the exercise is to create dynamic pictures, not perfect ones. With this ” shoot-from-the-hip” method, the more frames exposed, the better the chances are that you’ll come up with something interesting — a related series that may be arranged as a post. If you’d like additional tips for using the technique, or to submit your own images, drop a question or note in the “Leave a Comment” section, below. This feature will appear most Fridays.

On Being Rejected By “Hef” 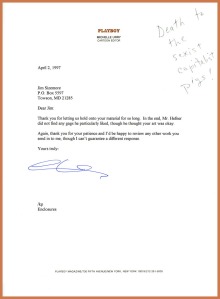 Back in the 1980s and ’90s when I was trying to become a magazine cartoonist and having only moderate success at venues such as  Saturday Evening Post, TV Guide, and Writer’s Digest, the publication I really wanted to crack was Playboy. Next to the New Yorker (which rejects just about everybody), Playboy was one of the highest paying magazines still in the gag cartooning game. The problem was I had no idea how to write a sexy caption or draw a sexy woman. But the money was good, so I decided to try anyway and hope that Hugh Hefner, the magazine’s founder and editor, would find my subtle attempts at fleshy humor appealing. After all, I thought, the man’s not just a booty-hound, he’s also claims to be an intellectual—all you had to do was read his essays in the magazine to know that. But as it turned out selling him one (or more) of my cartoons was not to be. (Click the letter to enlarge.)

Prior to receiving that letter I had been encouraged when the long-time cartoon editor of Playboy, Michelle Urry, “held” some images from three “batches” I submitted each month. So I knew that Hefner’s gatekeeper appreciated my indirect take when it came to male lust; she liked my gags enough to show them to her boss. Several months went by before I heard the final verdict, which you see above.

I showed the no-sale note to a feminist-Marxist friend of mine, just for laughs. She promptly displayed her sharp radical-chic sense of humor by scrawling the note in the upper right corner of the letter. Her comment alone made my efforts worthwhile.

Below are three rejected cartoons from one of the 1997 batchs of ten monthly cartoon ideas. You be the judge—are they Playboy-worthy? 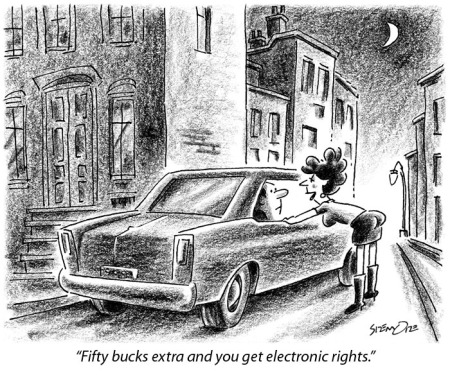 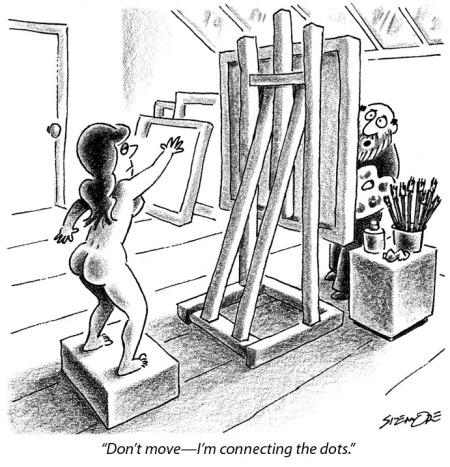 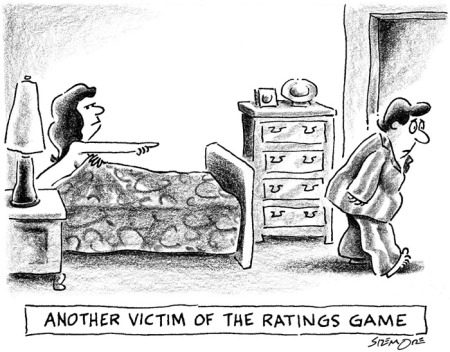 To purchase reprint rights for these and many other of my cartoons, visit my archive at cartoonstock.com

The Adventures of Morton

Click the image for a larger view. To purchase reprint rights for this comic strip, buy a framed print, or have it reproduced on T-shirts, mugs, aprons, etc., visit the CartoonStock website by clicking the sidebar link. If you would like to own the original of any of my selection of more than 500 cartoons, contact me for information about price and availability. My email address is: jimscartoons@aol.com Copyright © 2008 Jim Sizemore.