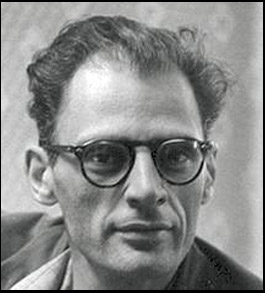 I mean by the time you’ve written your third play or so you know which buttons to push; if you want an easy success there’s no problem that way once you’ve gotten a story. People are pretty primitive—they really want the thing to turn out all right. After all, for a century and a half King Lear was played in England with a happy ending. I wrote a radio play about the boy who wrote that version—William Ireland—who forged Shakespeare’s plays, and edited King Lear so that it conformed to a middle-class view of life . . . . He was an expert forger. He fixed up several of the other plays, but this one he really rewrote. He was seventeen years old. And they produced it—it was a big success—and Boswell thought it was the greatest thing he’d ever seen, and so did all the others.

You see, what happened in Italy with Zeffirelli was—I can describe it very simply: there was a stage made up of steel frames; it is as though one were looking into the back of a bellows camera—you know, concentric oblong steel frames receding toward a center. The sides of these steel frames were covered, just like a camera is, but the actors could enter through openings in these covers. They could appear or disappear on the stage at any depth. Furthermore, pneumatic lifts silently and invisibly raised the actors up, so that they could appear for ten seconds—then disappear. Or a table would be raised or a whole group of furniture, which the actors would then use. So that the whole image of all this happening inside a man’s head was there from the first second, and remained right through the play.

Well, I have always felt that concentration camps, though they’re a phenomenon of totalitarian states, are also the logical conclusion of contemporary life. If you complain of people being shot down in the streets, of the absence of communication or social responsibility, of the rise of everyday violence which people have become accustomed to, and the dehumanization of feelings, then the ultimate development on an organized social level is the concentration camp. Camps didn’t happen in Africa where people had no connection with the basic development of Western civilization. They happened in the heart of Europe, in a country, for example, which was probably less anti-Semitic than other countries, like France. The Dreyfus case did not happen in Germany. In this play the question is, what is there between people that is indestructible? The concentration camp is the final expression of human separateness and its ultimate consequence. It is organized abandonment . . . one of the prime themes of After the Fall.

This is one in a series that will post on Wednesdays. If you’d like to read more of what people such as Arthur Miller, Sam Shepard, Joyce Carol Oates and other famous — and not so famous — playwrights have to say about the art and craft of writing for the stage, type “On Playwriting” into the small sidebar window and tap the “Search” button. (Arthur Miller On Playwriting part VIII will post next Wednesday.)

In a short story, or any kind of prose, I still can’t escape the feeling of a certain arbitrary quality . . . . To me the great thing is to write a good play, and when I’m writing a short story it’s as though I’m saying to myself, Well, I’m only doing this because I’m not writing a play at the moment. There’s guilt connected with it . . . . I think I reserve for plays those things that take a kind of excruciating effort.

The first play I wrote was in Michigan in 1935. It was written on a spring vacation in six days. I was so young that I dared do such things, begin it and finish it in a week. I’d seen about two plays in my life, so I didn’t know how long an act was supposed to be, but across the hall there was a fellow who did the costumes for the University theater and he said, “Well, it’s roughly forty minutes.” . . . .  As it turned out, the acts were longer than that, but the sense of the timing was in me even from the beginning, and the play had a form right from the start.

Being a playwright was always the maximum idea. I’d always felt that the theater was the most exciting and the most demanding form one could try to master. When I began to write, one assumed inevitably that one was in the mainstream that began with Aeschylus and went through about twenty-five hundred years of playwriting.

I think the young playwrights I’ve had any chance to talk to are either ignorant of the past or they feel the old forms are too square, or too cohesive. I may be wrong, but I don’t see that the whole tragic arc of the drama has had any effect on them.

I think that to make a direct or arithmetical comparison between any contemporary work and the classic tragedies is impossible because of the question of religion and power, which was taken for granted and is an a priori consideration in any classic tragedy. Like a religious ceremony, where they finally reached the objective by the sacrifice.

There’s no substitute for the impact on the mind of the spectacle of death. And there is no possibility, it seems to me, of speaking of tragedy without it.

When I was about twelve, I think it was, my mother took me to a theater one afternoon. We lived in Harlem and in Harlem there were two or three theaters that ran all the time, and many women would drop in for all or part of the afternoon performances. All I remember was that there were people in the hold of a ship, the stage was rocking—they actually rocked the stage—and some cannibal on the ship had a time bomb. And they were all looking for the cannibal: It was thrilling.

If I had ever thought that I was writing (Death of a Salesman) about my father, I suppose I never could have done it . . . . Willy is based on an individual whom I knew very little, who was a salesman; it was years later that I realized I had only seen that man about a total of four hours in twenty years. He gave one of those impressions that is basic, evidently. When I thought of him, he would simply be a mute man: he said no more than two hundred words to me . . . . I’ve always been aware of that kind of an agony, of someone who has some driving, implacable wish in him which never goes away, which he can never block out. And it broods over him, it makes him happy sometimes or it makes him suicidal, but it never leaves him. Any hero whom we even begin to think of as tragic is obsessed, whether it’s Lear or Hamlet or the women in the Greek plays.

This is one in a series that will post on Wednesdays. If you’d like to read more of what people such as Arthur Miller, Sam Shepard, Joyce Carol Oates and other famous — and not so famous — playwrights have to say about the art and craft of writing for the stage, type “On Playwriting” into the small sidebar window and tap the “Search” button. (Arthur Miller On Playwriting part II will post next Wednesday.)