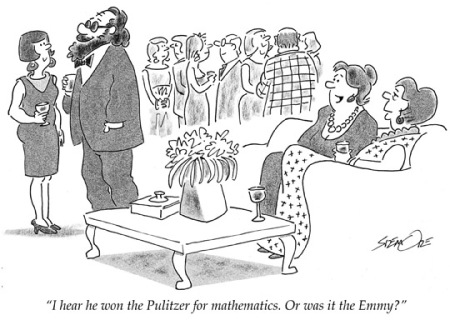 For years theatrical criticism was carried on mainly by reporters. Reporters who, by and large, had no references in the aesthetic theories of the drama, except in the most rudimentary way. And off in a corner, somewhere, the professors, with no relation whatsoever to the newspaper critics, were regarding the drama from a so-called academic viewpoint—with its relentless standards of tragedy, and so forth. What the reporters had very often was a simple, primitive love of a good show. And if nothing else, you could tell whether that level of mind was genuinely interested or not. There was a certain naïveté in the reportage. They could destroy plays which dealt on a level of sensibility that was beyond them. But by and large, you got a playback on what you put in. They knew how to laugh, cry, at least a native kind of reaction, stamp their feet—they loved the theater. Since then, the reporter-critics have been largely displaced by academic critics or graduates of that school. Quite frankly, two-thirds of the time I don’t know what they really feel about the play. They seem to feel that the theater is an intrusion on literature. The theater as theater—as a place where people go to be swept up in some new experience—seems to antagonize them. I don’t think we can really do away with joy: the joy of being distracted altogether in the service of some aesthetic. That seems to be the general drift, but it won’t work: sooner or later the theater outwits everybody. Someone comes in who just loves to write, or to act, and who’ll sweep the audience, and the critics, with him.

Everything influences playwrights. A playwright who isn’t influenced is never of any use. He’s the litmus paper of the arts. He’s got to be, because if he isn’t working on the same wavelength as the audience, no one would know what in hell he was talking about. He is a kind of psychic journalist, even when he’s great; consequently, for him the total atmosphere is more important in this art than it is probably in any other.

There are some biological laws in the theater which can’t be violated. It should not be made into an activated chess game. You can’t have a theater based upon anything other than a mass audience if it’s going to succeed. The larger the better. It’s the law of the theater. In the Greek audience fourteen thousand people sat down at the same time, to see a play. Fourteen thousand people! And nobody can tell me that those people were all readers of the New York Review of Books! Even Shakespeare was smashed around in his time by university people. I think for much the same reasons—because he was reaching for those parts of man’s makeup which respond to melodrama, broad comedy, violence, dirty words, and blood. Plenty of blood, murder—and not very well-motivated at that.

(Eugene O’Neill) had one virtue which is not technical, it’s what I call “drumming”; he repeats something up to and past the point where you say, “I know this, I’ve heard this ninety-three different ways,” and suddenly you realize you are being swept up in something that you thought you understood and he has drummed you over the horizon into a new perception. He doesn’t care if he’s repeating. It’s part of his insensitivity. He’s a very insensitive writer. There’s no finesse at all: he’s the Dreiser of the stage. He writes with heavy pencils. His virtue is that he insists on his climax, and not the one you would want to put there. His failing is that so many of his plays are so distorted that one no longer knows on what level to receive them. His people are not symbolic; his lines are certainly not verse; the prose is not realistic—his is the never-never land of a quasi-Strindberg writer. But where he’s wonderful, it’s superb.

This is one in a series that will post on Wednesdays. If you’d like to read more of what people such as Arthur Miller, Sam Shepard, Joyce Carol Oates and other famous — and not so famous — playwrights have to say about the art and craft of writing for the stage, type “On Playwriting” into the small sidebar window and tap the “Search” button. (Arthur Miller On Playwriting part VII will post next Wednesday.)

“Klaatu Barada Nikto,” my short story, appears in the August, 2008 issue of Urbanite, a slick, full-color monthly magazine available FREE at hundreds of commercial locations (restaurants, bars, coffee shops, etc.), in the Baltimore metro area. If you don’t live around here you can still read “Klaatu Barada Nikto,” online, by clicking the Urbanite Magazine link in the sidebar blogroll. (I could explain the title but if I did it would ruin the story, so I won’t.)

There are lots of good reasons to check out the 50th issue of “The Urb.” Take the August cover for starters, it just looks great. The delightful faux 40s pulp fiction-style illustration by Deanna Staffo serves as a visually ironic setup for Editor-in-Chief David Dudley’s serious Q&A interview with Patsy Sims about the current “truthiness” flap—is it fiction or nonfiction?—a hot topic in literary circles. Inside, too, aside from the fine articles, I’ve noticed a big improvement in overall graphic design—especially in art and photography selection, and page layouts.

I also want to take this opportunity to thank Ms. Susan McCallum-Simth, the Urbanite literary editor, for her sensitive help in getting my bloated 8,000 word manuscript down to a svelte 3,500 words; and for her insightful essay introducing the five featured stories. As I’ve told Susan (and I’m only slightly kidding), when it comes to my writing I like to hide behind the “emotional truth” shield and claim to be an “Impressionist,” painting my version of the world with words, whether fiction or nonfiction. After giving it a moment or two of thought, I estimate that “Klaatu Barada Nikto” comes in at 98.9 percent true fiction. Copyright © 2008 Jim Sizemore.