Text and photographs by Florence Newman

Many of my earliest rambles in Caithness (the county constituting the northeastern corner of Great Britain) were inspired by names on the Ordnance Survey map (OS Landranger 12: Thurso, Wick and surrounding area) or by brochures in the Visitor’s Centre in Thurso (“Three Walks in Thurso,” “Walks: Caithness”). My favorite walk to my favorite place in Caithness came from a Visitor’s Centre brochure:

Cross the pedestrian bridge over the Thurso River inlet, up the sidewalk beside Castletown Road

Carry straight on when the road bears right, passing on your left the nineteenth-century folly reminiscent of Rapunzel’s tower with its crenellated turrets (pausing to wish you lived there, like the people who have put flower pots on the window ledges and parked their VW inside the wrought iron gates)

Follow the single lane road between two fields—looking back and down toward the coast, you can just see the ruins of Thurso Castle, constructed in the 1860’s and hardly worth your trouble

Take the first left and march confidently into the working farm, wending your way between aluminum-sided barns and balloon-wheeled tractors until you face the rocky shore and the Pentland Firth churning beyond

To your right, obscured by tall grass, is the start of a narrow track along the coast that leads after a mile or so to a sea cave hidden beneath mossy headlands

During the walk, to be undertaken on the rare sunny day, whenever you are not watching your feet to avoid twisting an ankle in the rut gouged by sheep hooves (the typical meaning of “track” in this brochure), you have a spectacular view of the Firth, its choppy green waters fringed by cascading flagstone slabs and interrupted only by an occasional fishing boat bobbing off Dunnet Head or by the white wake of the Pentland ferry shuttling day-trippers to and from the Shetland Islands

Divert mid-way to the walled lookout that juts from the rocky shore, admire the blue arc of the sky as it meets the sea, and imagine the many wives and sweethearts who had waited here, often in vain, to catch first sight of the vessel bringing their sailor home; note, as you leave, the simple cross impressed on the seaward wall

Eventually the land will rise to precipitous heights and the even spread of shoreline will give way to steep tiers and stacks of stone, like some gigantic abstract sculpture garden growing from the waves

You will hear the sea cave before you see it

In fact, you would not see it at all if the brochure hadn’t told you to look for it near where some power lines sweep down to another farm. What the brochure doesn’t tell you is that when you leave the path and pick your way out a sloping promontory and sit on a dry patch of loam and pull off your shoes and socks and lie back with your eyes closed in the warm sun, you will be embraced by a symphony of sounds: the deep, slow, thunderous throb of the ocean waves hitting the base of the headland, the crescendo and decrescendo of waves rushing over the jagged slate shelves, the haunting echoes of the longer waves as they surge into the caverns hollowed out of the cliff, century by century, and the faint, melodic plink-plonk of rainwater dripping from ledge to mossy ledge before releasing into the sonorous cove below.

I had been to the sea cave perhaps a half a dozen times before I felt the slightest urge to venture any further than that loamy bed. One day, after a plowman’s lunch (a thick slab of cheddar cheese between two slices of bread slathered with butter) and a snooze on the mossy ledge, I climbed back up to the track, and instead of retracing my steps, continued on along the headland. Here and there among the wind-swept grasses were cement platforms cracked with age and sprouting weeds and wildflowers; some still held rusting iron beams, the remains of artillery installed to repel German aircraft during World War II. How many days had been spent fortifying this remote stretch of Scottish shore against enemy attack? How many nights had been spent listening for the drone of bombers and scanning the horizon for their ominous shadows? Those anxious days and nights, for all of their intensity, had ended long ago, leaving only scars of white cement on the landscape, while in the hidden cave below, the heart of the ocean continued to beat.

In visiting Spain recently to hike part of El Camino, a trek that pilgrims the world over have been doing for centuries, I was prepared for the big differences that you associate with vacationing in a foreign country: currency, language, and climate. But it was the small differences, like finding a Starbuck’s closed at 7:30 on a Saturday morning in a big city like Madrid, that took me by surprise. (Click images for larger views.)

I’ll never forget the elderly man who interrupted his stroll down a country lane to give me a walnut or the two volunteers at a refugio (or shelter) in El Acebo who hosted a meal for twenty pilgrims from all over the world. The food, wine, music, hospitality and conversation that night were truly memorable.

But in the course of my two-week hiking trip, there were some baffling moments too. These differences, unexplained in guidebooks, jostled my assumptions about the most mundane aspects of daily living. Some of them were positively mystifying and others made me laugh out loud. Take the hamburger. When I ordered one in Astorga, it tasted different. The chef’s view of our American staple was quite literal. The burger was made of chopped ham.

Another time, my limited Spanish put me at a disadvantage when ordering a sandwich. My lunch, though tasty, turned out to be a double dose of carbohydrates: mashed potatoes between two slices of white bread. It reminded me of a trip to Salt Lake City and a restaurant that served spaghetti with French fries.

The public restrooms were also occasionally baffling. At one private refugio for pilgrims in Hontanas, the stall to the women’s toilet contained no seat or throne, simply a hole in the metal floor and an outline of where to place your feet. Being pressed for time, I squatted over the opening in the floor, did my business and wondered how a handicapped person might navigate under similar circumstances. It was only later that I discovered, at the same location, toilets – with and without seats. 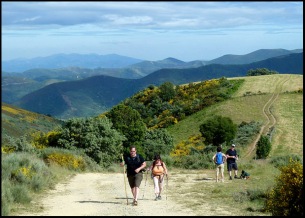 Further down the road, in Boadillo del Camino, another restroom had me flummoxed. I looked around for a towel dispenser. No luck. But on one wall hung a metal contraption that resembled an automatic hand dryer. After pressing the knob, water sloshed all over the floor. I’m still confused. Was it for the cleaning staff to put their buckets under or a convenient tap for pilgrims to refill their water bottles?

Another time I tried to order a chunk of Swiss cheese, which was on special, at a deli counter at a local supermarket. The woman behind the counter said I couldn’t have it, but she was willing to slice another kind. Did the sale on Swiss begin the next day? I’ll never know.

Public transportation in Spain is punctual, comparatively inexpensive, and comfortable. But my expectations about how things work were made in America. When traveling by train from Chamartín Station in Madrid to Burgos, I entered the coach and sat down, just as I would on Amtrak or MARC, Maryland’s commuter railroad. A young man approached, pointing and waving his ticket. It took me awhile to realize I was sitting in his seat. Sure enough, if I had looked closely, my ticket had a coach and seat assignment. I moved and the gentleman, who had graciously parked himself elsewhere, smiled.

We worked it out in a civilized way. Poco a poco, little by little, I was learning the Spanish way of doing things.

I wonder what first-time visitors to the U.S. make of our culture?

Susan Middaugh is a self-employed business writer in Baltimore who also writes the occasional personal essay. Her essays have appeared in the Christian Science Monitor, the Baltimore Sun and on the website New-Works.org. Susan is also a playwright with short and full length works produced in the United States, Canada and England. The One Act Play Depot in Canada has published her short play, Such Good Neighbors. Several of her personal essays have appeared on this blog. To find them, simply type her name in the little search window, or check out the archives in the sidebar, beginning in April of 2009. Also in the sidebar under the Blogroll, Business and Writing labels, there are links to Susan’s website, Have Pen Will Travel.