The dress hung in my mother’s attic for over 20 years and in my basement for nearly a decade.

The heavy plastic, which protected the gown after its one and only wearing, had collected dust and grime from years of neglect. But the contents of the plastic bag, sealed tightly by a local dry cleaner, who may have been a curator in a previous life, retained the same winsome appeal that had attracted me in the first place. It was still a pretty dress, simple but elegant, with a single row of flowers down the front and along the bottom edge. The dry cleaner had even taken the trouble to shape the dress in a female form and fluffed it throughout with pink tissue paper, visible at the neck.

After my parents died, my brother and sisters and I divvied up stuff that had accumulated during our parents’ 45-year marriage. One of the items I became the custodian of was my own wedding dress. Although divorced for many years, I couldn’t bear to toss it. Maybe my teenage daughter, Liza, would want to wear it someday. When I got home, I threw the dress — gently — giving it plenty of room, into a basement closet, containing extra leaves for my dining room table, some curtain rods and an old suitcase, and promptly forgot about it.

With the approach of Liza’s 25th birthday, it was time for me to take stock of this still lovely size-nine dress that had hung in a closet for nearly 30 years. Although there were no nuptials in Liza’s forecast, the prospect of revisiting “something old, something new, something borrowed . . . ” was in my mind, if not in hers. Looking around for a family precedent, I found there was none. My own mother, who had married during the war, wore a suit, flowered hat, and modest furs for the occasion. Mom did not save her wedding garments for me and my four younger sisters — except in black and white photographs. What about my grandmothers, one married twice, the other dead by the time I was seven? With Mona and Nana, the subject of wedding dresses never came up.

As a rule, the women in my family don’t like hand me downs. Except for me, they don’t buy at thrift stores or consignment shops. They like to open a gift and see the tags. They like being first. They like new. Hand me downs weren’t an issue for me as a child because I am the oldest. As an adult, I like finding something of value in a second-hand shop — whether a sturdy bookcase for my office, a sweater in mint condition or a Dana Buchman skirt at a considerable discount. If in the first or second wearing, the clothing still carries another woman’s scent, I don’t mind. I breathe deep and for a moment pretend to be someone else — a woman from a different century perhaps, another race, thinner, younger, wiser, funnier. For whatever reason, this woman has cast off and recycled this garment instead of tossing it in the dustbin or wearing it herself till it is threadbare. I am the beneficiary. Secondhand is not necessarily second best so long as there is life and laundry detergent.

Given my own family’s preference for new, who are the women who pass down their wedding dresses to daughters, granddaughters or nieces and do so with an expectation of receptivity? Certainly there are practical aspects to this tradition. An obvious one is that the wedding garment fits or may be altered to fit the bride; another that she likes the taste or style of her relative. A more subtle consideration and perhaps the overriding one: was the donor’s marriage essentially a happy one? Did the man and woman truly love one another? It seems to me that women who have had happy marriages are more inclined to want to share those feelings in a symbolic way – through the gift or loan of a wedding dress.

What then of former brides like myself whose marriages ended in divorce? According to the statistics, we are one out of every two. Do we do our daughters a favor, do we have their best interests in mind if we expect them to clothe themselves in our past? Because I hope my daughter will fare better in affairs of the heart and in matrimony than I did the first time, I chose to donate my wedding dress to charity. It is my hope that a stranger will see the dress for what it is — gently used and with some history, but no baggage.

I can see her now, a young June bride very much in love and with high hopes, as she raises the plastic covering. “What a pretty dress. Simple yet elegant. Let me try it on.”

Susan Middaugh is a self-employed business writer in Baltimore who also writes the occasional personal essay. Her essays have appeared in the Christian Science Monitor, the Baltimore Sun and on the website New-Works.org. Susan is also a playwright with short and full length works produced in the United States, Canada and England. The One Act Play Depot in Canada has published her short play, Such Good Neighbors. Her personal essay, Turning Green, was published on this blog on April 21, 2009. To read it, check out the April archives in the sidebar. Also in the sidebar, under the blogroll, business and writing labels, there are links to Susan’s Have Pen Will Travel website. 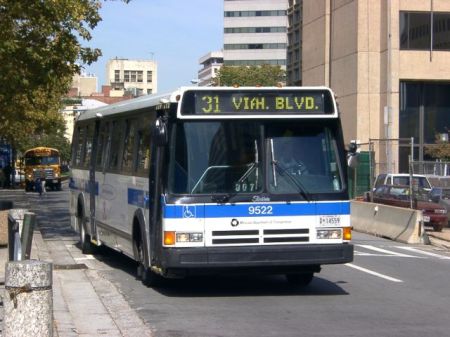 I believe in taking public transportation to work instead of driving.
As a card-carrying member of the Sierra Club and the Mountain Club of Maryland, I’d like to say my primary motive is energy conservation. It’s not. I want to save money on gas and parking and to extend the life of Takeshi, my Japanese car, whose odometer has passed the 180,000-mile mark.

There are other advantages I hadn’t anticipated. I love walking down the hill in the morning from my house to the bus stop. Being outside in the fresh air fills my spirit in a way that driving with the windows rolled up or down fails to do. The exercise is healthy and the world seems bigger, with a greater sense of possibility.

The 45-minute bus ride is found time, great for reading the newspaper, daydreaming, or unwinding after a day’s work. Traveling in a 30 mile an hour zone through city streets instead of bebopping down the highway at 65 mph helps me slow down my life, a good thing.

I’ve also made new acquaintances at the bus stop that I never would have met behind the wheel of my car. One of them, a middle-aged man in a baseball cap and a camouflage jacket, asked the driver to wait one day when I was late. My new young friend, Eric, who is in high school, is looking for a part-time job. Forrest, a former nurse, tells me about his interest in archeology. An African-American woman in her 40s describes her life after a stroke. Such conversations help me feel connected to other people in my community.

There have also been some surprises. On a crowded city bus, I’ve seen men of different ages offer their seats to women of other races, women who are old, pregnant, or juggling strollers and young children. These moments of civility have restored my faith in human nature.

Drawbacks to riding instead of driving? Sure. On a good day, riding the bus takes three times longer than it does for me to drive the eight miles to my office. Walking to and from my stop can add up to 40 minutes to my daily commute. If the driver is late, a one-way trip can become a journey. If the bus is early, as sometimes happens, this grandmother runs for it or waits for the next one. If I were punching a clock or had to be at a daycare center by a set time, the unpredictability could be a problem.

Walking up the hill to my house each evening can also be a chore, especially if it’s hot or raining or I’m tired. As a distraction, I listen for the tinkle of wind chimes on my neighbors’ porches, breathe in the cooking smells that float into the street, and wonder what the people in my town are having for dinner.

Overall, I feel fortunate to have a choice of transportation. On days when I want to bag the bus, I drive a few miles to light rail….for the same price. Either way, I feel like I’m turning green, staying fit and saving money.

Susan Middaugh is a business writer in Baltimore who writes the occasional personal essay. Her essays have appeared in the Christian Science Monitor, the Baltimore Sun and New-Works.org. Susan is also a playwright with short and full length works produced in the United States, Canada and England. The One Act Play Depot in Canada has published her short play, Such Good Neighbors. Oh, and she’s also a very good dancer.