Adapted from: Is ‘The Real Inspector Hound’ a Shaggy Dog Story?

“Hound” is timeless in the truly pejorative sense . . . incapable of change. It doesn’t lend itself to deep scrutiny. It’s an entertainment, just like a mechanical toy. It waves a flag, squeaks and turns a turtle and carries on. It’s a logical structure with a vein of parody going through it. There’s no reason to write a play like that. It’s an enjoyment. And that is what it is. One hopes it will work out all right, because in the nature of theater there’s this interesting transition between the text and the event. The ball can be dropped in many different ways. Or not dropped.

I don’t trust writer’s who wax confidently about what they do and why they do it. In writing plays, I find that the problems — if that’s what they are — are very mundane, and in a way surface. The wellspring of a play is often curiously uninteresting — it derives from insubstantial stray images and ideas, What it doesn’t arise from at all, I don’t think, is anything like a complete sense of the whole. You know, What am I going to try to achieve here? What is it going to be about underneath?

I seldom worry about underneath. Even when I’m aware that there is an underneath. I tend to try and suppress it further under, because theater is a wonderfully, refreshingly simple event. It’s a storytelling event. The story holds or it doesn’t . . .  The same would be true of a short story or a novel.

The first idea I had was that I’d like to write a play in which the first scene turned out to have been written by a character in the second scene. That was all I started with. There is a strong — not autobiographical element — but a strong editorial element because the man spouts opinions generally which I subscribe to. So in that sense there’s a lot of me in it, more than in most plays, but only by virtue of the fact that the protagonist is a writer in London in 1980-odd.

“Hapgood” has a physicist in it, who talks about physics a bit. But I don’t think that actually is the problem. The intricacies of the spy plot are quite difficult. I think I’m not as good as John le Carré at doing that kind of story. But I find I’m talking about the play as though it failed in some way for me. In fact, I’m interested by it in so far as it succeeded.

One of the built-in ironies of being a playwright at all is that one is constantly trying to put into dramatic form questions and answers that require perhaps an essay, perhaps a book, but are too important and too subtle, really, to have to account for themselves within the limitations of what’s really happening in the theater, which is that the story is being told in dialogue.

(I use) this ill-suited medium (to account for) matters like morality or empire, or the authenticity of romantic love (with the reservation) that failure is almost built into a play if that is its true purpose, its true function. And so one avoids failure if one can, by denying that that is the function of the play. And one says that, no, that was merely an aspect or a sidelight of the play’s function and the primary function is to tell an entertaining story.

My primary delight, which is a good enough word for the fuel that one needs to do any work at all, is in using the language rather than the purpose to which language is put . . . and more than language, I would say theater — the way theater works, through disclosure and surprise. 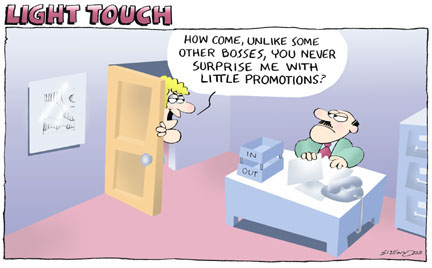 To purchase reprint rights for this cartoon, buy a print, or have it reproduced on T-shirts, mugs, aprons, etc., visit the CartoonStock website by clicking the sidebar link. If you would like to own the original of any of my selection of more than 500 gag cartoons, contact me for information about price and availability. My e-mail address is: jimscartoons@aol.com