Evolution of a “Gag” Idea 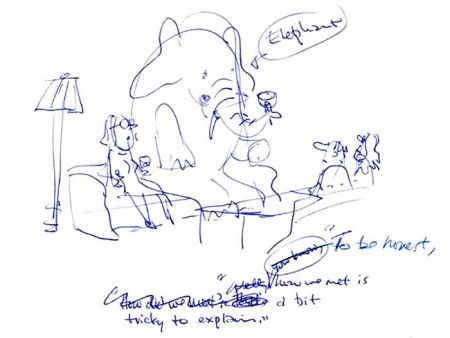 The above sketch is the first sloppy glimmer of a cartoon idea, one I thought worth developing. (Click images to enlarge.) Note that in this early stage I’m already making edits to the caption. By the end of the process, the idea suggested by the doodle will become something else altogether.

Once I have a visual idea, I use tracing paper to refine the image. My goal is to sharpen the drawing without losing the vitality of the original, something I find difficult to achieve. Here I’m also using the side of my pencil lead to freely suggest a possible shading scheme for the final drawing. (I use blue pencil because it’s cleaner to work with than graphite.) Meanwhile, I’ve also begun to play with a very different idea for the caption. It’s not unusual for one of my cartoon ideas to change by a word or two, but for the caption to do a complete flip — as happened in this case — is rare.

Back to the drawing. In stage three of the process I go over the lines, this time in ink, still trying to keep the image as “spontaneous” as possible. My line work generally fails to express the illusion of volume and shape that I’m after, so I add shading with a black Prismacolor pencil. After working a bit more to sharpen the new caption, I scan the inked image into Photoshop for the final cleanup. My goal is to make the corrections, additions, deletions, size changes, etc., appear to be as “natural” — as un-computer-like — as possible.

And finally, here’s the finished cartoon. You’ll notice that I’ve decided to go with the second, “too old for me” version of the caption, which I’m convinced is the better punchline. But I could be wrong. What do you think—did I make the right choice?